At $20 million a year for 30 years, a sports marketing expert said Hideki Matsuyama could “unlock $600 million in endorsements” because of yesterday’s Masters win at Augusta National.

It’s all about the hats and the shirts.

A golfer’s hat has been called prime real estate. Hideki Matsuyama had Srixon on his hat and shirt. Meanwhile, his collar said Indeed and the shirt also had the Lexus logo:

Similarly, Xander Schauffele has Adidas and Callaway on his hat: 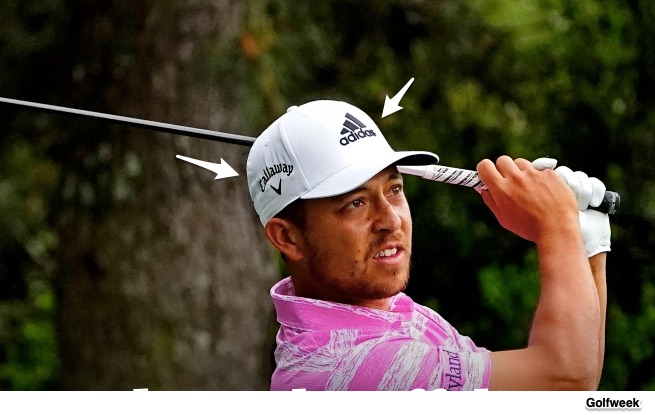 Through their layers, covers, and dimples, firms differentiate golf balls. Weighing  no more than 1.62 ounces, a golf ball has two to five layers, an outer cover, and 250-450 dimples. More layers and dimples elevate the price. They create a premium golf ball. Nike’s goal was for Woods to facilitate premium pricing.

Between 2000 and 2010, Tiger Woods had two five-year contracts with Nike that totaled $200 million. Signing, Woods said he would use the golf balls, wear the clothing, use the clubs. His impact was considerable. Woods’s endorsement elevated sales and prices. Associating him with Nike, competitors’ customers switched brands and new golfers made Nike purchases. The study concludes that his endorsement effect boosted Nike’s golf ball sales by 9.9 million dozen and added $103 million in revenue.

This was the Woods/Nike timeline:

Below, the graph shows the upward trending sales (until the 2009 scandal): 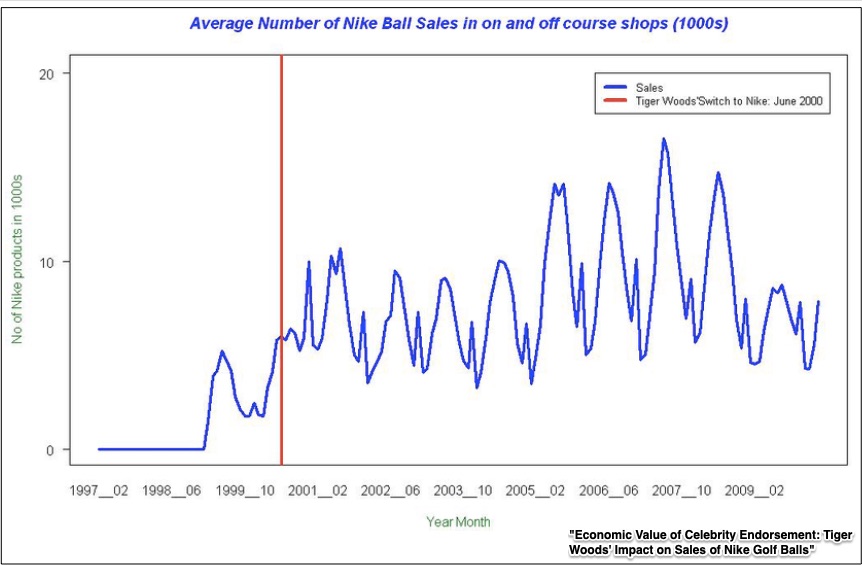 When large firms compete, they try to achieve product differentiation. Nike believed that through Tiger Woods’s expertise and popularity, his aura would spill over to their golf balls, apparel, and equipment. The sales numbers seem to indicate they were right.

An economist might say that oligopolies are large firms with pricing power that try to achieve product differentiation. After all, we know how Southwest differs from United and JetBlue. We think we can distinguish Coke from Pepsi. And Tiger Woods encouraged golfers to believe that Nike was different from Titleist.

To see an oligopoly on a market structure continuum, we can start with the most competitive markets and smallest businesses on the left and then see increasingly powerful firms as we move closer to monopoly:

A Tiger Woods endorsement helped Nike differentiate a premium golf ball for an oligopoly. So too might Hideki Matsuyama.

My sources and more: Golfweek was a good starting point for investigating celebrity endorsements. Then, for more, you might enjoy looking at Golficity, Golf Digest, and the 10 top golf brands in 2014 and now. However, if your preference is a very palatable 50 academic pages on the Tiger Woods impact, I recommend this paper.

What Your Car Says About You and Your Neighborhood

Where (International) Trade Grades Are Changing