What We Mean by Socialism

A May 9 Gallup News headline said, “Less Than Half in U.S. Would Vote for a Socialist.”

In this Gallup Poll from an April survey. socialism is at the bottom of the electability list: 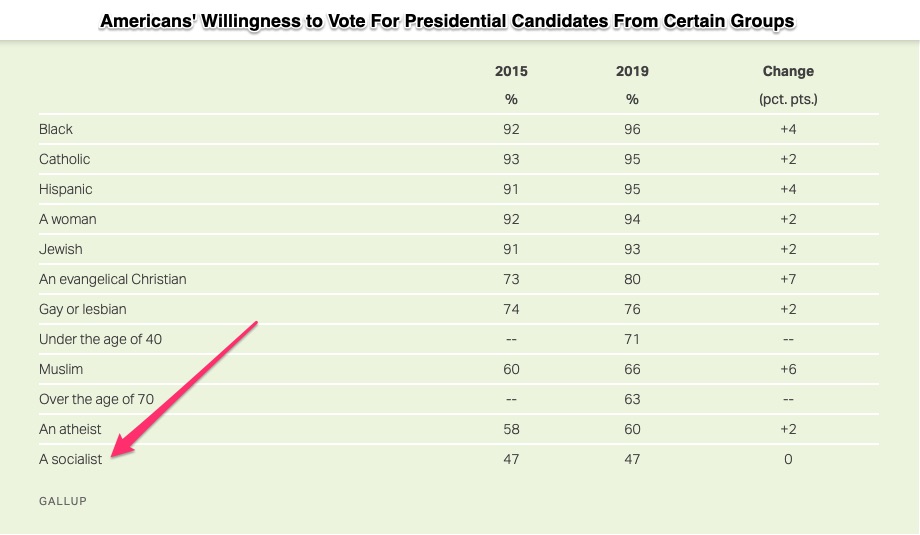 But then it gets more complicated.

Viewed through a political party lens, we see the divide between Republicans and Democrats and also different definitions. When Gallup asked Republicans what they meant by socialism, they tended toward government ownership of the means of production. Meanwhile Democrats were more likely to be thinking of more services from government.

Gallup has been asking people about socialism since 1949.

In 1949, slightly more than one third of Gallup’s participants said socialism meant government ownership of utilities, control of everything, control of business. Now equality is the most popular meaning of socialism among people who believe they understand it: 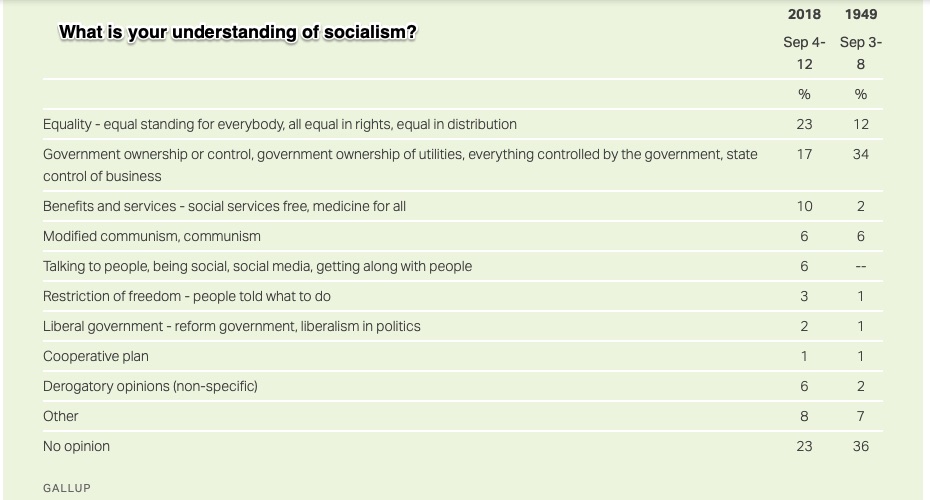 From there, Gallup tells us that people who associate socialism with equality vary considerably. Some refer to equal incomes and wealth while others cite equal opportunity. Then we have the 19% who think of the benefits and services that government could provide. I assume here they mean “Medicare-for-all.” (which again needs further definition)

A Definition of Socialism

A traditional definition of socialism takes us to a centrally planned economy. It is a top-down system for producing and distributing goods and services. It means that government controls a country’s land, labor, and capital–the means of production. And then with those resources, it supplies the goods and services that people want and need.

Those of us who believe that a “top-down” economy functions inefficiently and  insufficiently cite the impossibility of one group being able to know what everyone needs and wants. Instead, we look at why “bottom-up” systems work better.

In my class I like to start with Adam Smith, the 18th century economic thinker who explained the merits of a “bottom-up” economic system. Through many hundreds of pages of facts and stories in his Wealth of Nations (1776), Smith told us that “It is not from the benevolence of the butcher, the brewer, or the baker that we expect our dinner, but from their regard to their own self-interest.”

More than anyone, businesspeople have the incentive to identify and produce what we want. Seeking profit, they have the incentive to optimize their land, labor and capital while competition constrains them and prices give them signals. Ultimately, if all works as it should, then rather amazingly, when no one tells everyone what they have to do, an economic system performs best. But as we know, 21st century capitalism needs some government.

So we have socialism as top-down and capitalism as bottom-up. Rather than focusing on socialism, I suspect our political debate is really about how much to combine the two.

My sources and more: Thanks to the Conversable Economist for reminding me that we needed a closer look at socialism. From there, fivethirtyeight was the next logical destination. Each article, including The Washington Post, returned me to polls from Gallup, here and here. You also might want to take a took at what yougov said about the declining popularity of capitalism. And finally, for the ideal discussion of socialism, do read this econlib article from Robert Heilbroner. He writes so beautifully and was a socialist.

The Five Stars We Don't Deserve

May 2019 Friday's e-links: From the Economics of Eating to socialism and Shannon the Towel