What We Can Learn From Spain’s Ice Shortage

I suspect that few people in Spain expected an ice shortage. But now some supermarkets are limiting shoppers to two bags a person and bars are running out. The problems started during March when ice manufacturers decided to delay production. Instead, responding to an uncertain economy, continuing Covid outbreaks, and energy costing 50 to 60 percent more, they delayed until May. Now with sizzling temperatures, a surge of tourists, and life (sort of) returning to normal, they realize they miscalculated.

Where are we going? To rationing ice. But first let’s look at some history.

Steve Jobs told us that, “a lot of times, people don’t know what they want until you show it to them.” Similarly, in a world of warm drinks, no one knew to chill them until Frederic Tudor introduced them to ice.

Our story starts in 1806. Living on his family estate in Massachusetts, Frederic Tudor realized that the people in Central America could use the ice from his frozen pond. But when he tried to raise enough money to send an 80 ton shipment of ice to Martinique, friends and neighbors thought he was crazy. So, he self-funded the venture and it flopped. The ice arrived intact but no one wanted to buy any.

From Frozen, this ice harvesting song pretty accurately shows how Frederic Tudor got his ice. What you don’t see is the icehouse where, in 80 foot high stacks, it was stored and the sawdust he used to preserve the ice when transporting it.

Persisting, Tudor offered free ice at bars, convinced doctors that ice would help feverish patients and secured monopolies. By mid-century, the cold drink habit had spread from Savannah, Charleston, New Orleans, and Havana to Calcutta and beyond. Meanwhile back in London, it was said that Queen Victoria of England would only use Massachusetts ice from Wenham Lake in her drinks.

And yes, for months, the ice really did not melt as it moved around the world: 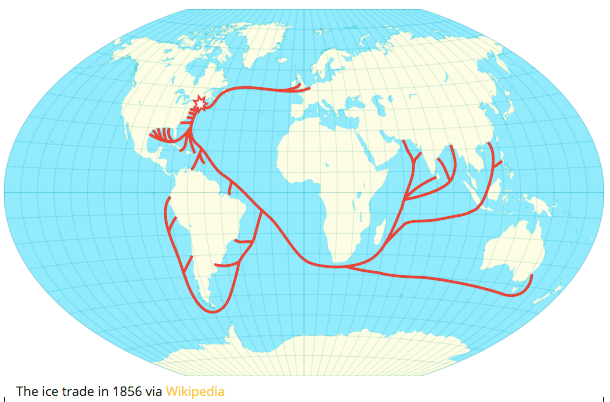 The media tell us that Spain is rationing ice.

As economists, we know that always they were rationing ice. It’s just more evident now. Because all quantities are limited, we have to decide who gets what and how much. Deciding who gets what is rationing.

The solutions come from our economic systems. In a market economy supply and demand and private ownership provide some answers about who gets the limited quantities of goods and services.. In a command economy, a small group of people or one person says how goods and services will be produced and distributed. And somewhat similarly, traditional societies ration but here it is decided by the past and what people have always done.

So yes, not having enough ice results in rationing. It’s just rationing in response to shortages rather than the usual response to limited quantities of ice.

My sources and more: Preparing a previous post on Frederic Tudor, I enjoyed the 99% Invisible podcast  From there, Mental Floss and The Ice King had more of the facts. Then, for today’s facts, Reuters took the ice story to Spain. Please note that today’s history of ice was in a past econlife post.