In a 2019 survey, the Amazon Prime members that responded said they shopped a few times a week. Meanwhile, 7 percent placed orders daily.

Is there any level where the Amazon Prime fee is too high?

During February 2005, Amazon offered us Prime. Before, we were charged an extra $9.48 for two day delivery. After, if we paid the $79.00 annual Prime fee, we got Amazon’s 2-day delivery promise.

Then, in 2018, again the price went up. During May, new subscribers paid $119 as did the people who renewed in June and after. This time, accounting for inflation, Prime became more expensive. Had a $79.00 2005 price retained the same purchasing power, then, it should have been $103.63, not $119.00. Amazon explained that its costs and services were up.

Still, at more than 150 million, people stuck with the higher annual fee: 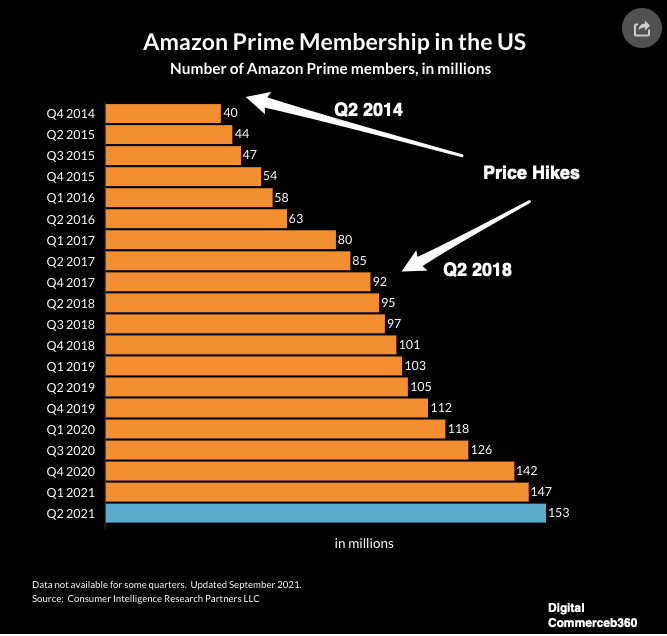 In its April 15 shareholder letter, Amazon said that globally it had 200 million prime members, up 50 million from January 2020.

An economist would cite price inelasticity as the reason for Prime loyalty. Elasticity is the demand phenomenon that looks at the impact of a price change on how much more or less of a quantity we are willing and able to buy. If our response to a price change is considerable–if it stretches up or down a lot–then we say our demand is elastic. However, when we pretty much ignore the price change, then we are in the inelastic range. Typically for necessities like medication and items with no substitutes, our demand is inelastic. Also though, one item can have an inelastic and elastic range. The inelastic range for gasoline could be as much as $4.00 or more but soon, maybe at $5.00 we become elastic and drive much less. For Amazon Prime, according to Consumer Intelligence Research Partners, 98 percent continue renewing.

With Amazon Prime observers expecting a new price increase, they are asking if consumer demand for the service could become more elastic.

My sources and more: Yesterday’s NY Times started me thinking about Amazon Prime’s prices. From there, I found more Prime details at Statista, Vox, Motley Fool, and CNBC.

Our featured image is from CNN Business.