What Would John Maynard Keynes Have Said About Stimulus Spending?

U.S. GDP growth will soon disappear. It is possible that the metric showing our production of goods and services could have a double digit contraction. To convey the idea, but not the amount, I’ve drawn a downward bar:

Close to 3.3 million, recent unemployment claims were at unheard of levels: 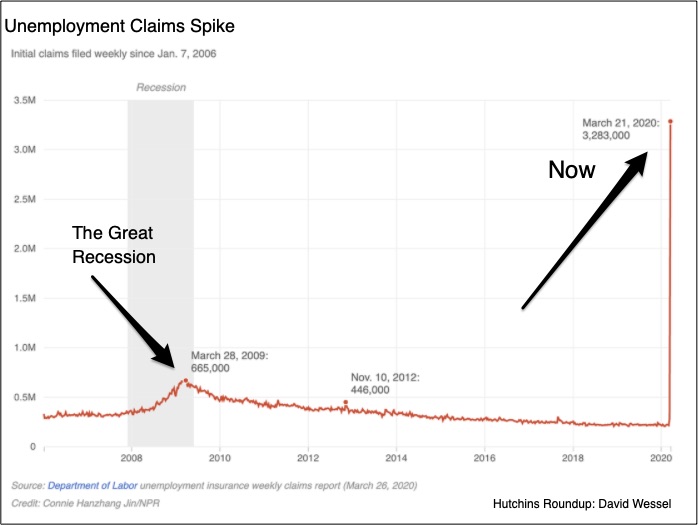 The Washington Post illustrated the gargantuan nature of stimulus spending that would help the unemployed and jumpstart economic activity. The numbers represent a large proportion of the current federal budget: 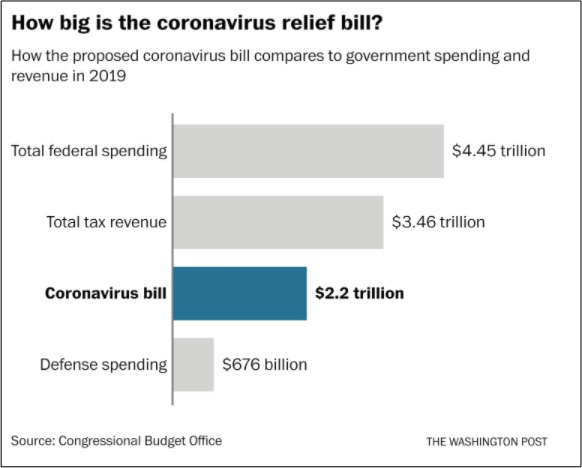 Looking at proposed spending, we see that most of the stimulus is divided among businesses, state and local governments, and individuals: 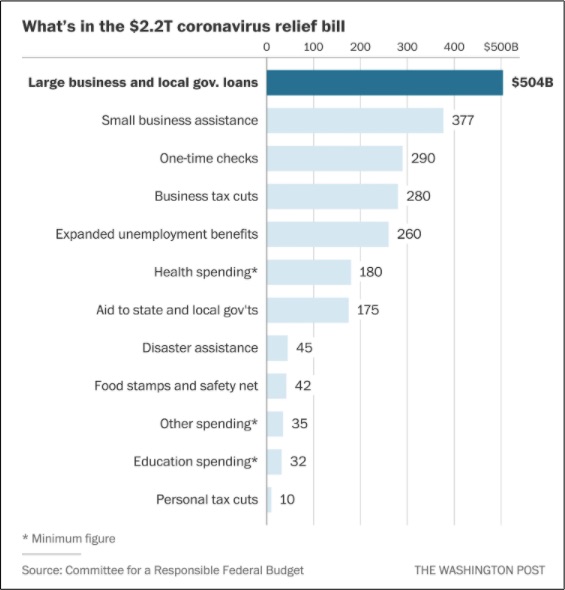 Our Bottom Line: The Keynesian Response

During a U.S. visit in 1934, British economist John Maynard Keynes tried to help us with the Great Depression. He not only gave President Roosevelt some advice but also, (reputedly) crumpled a pile of towels in a restroom rather than just one. His goal was to create jobs.

More than businesses though, Keynes (1883-1946) believed that a contracting economy needed government intervention. Through deficit financing. government spending could multiply as it passed from hand to hand. Just pay a worker and he or she spends that income, the recipient then spends it, businesses have to expand, and an inflated total (called the multiplier) of spending enters the GDP.

Implementing a Keynesian approach during the Great Depression, government passed Social Security, unemployment legislation, and a slew of jobs programs. It was okay to create a deficit. Once the economy recovered, it could afford to pay it back.

During the Great Recession (December 2007 to June 2009), President Obama perpetuated a Keynesian approach. Through the American Recovery and Reinvestment Act of 2009, the Congress allocated more than $800 billion.

And now again, the stimulus package embodies a Keynesian philosophy.

My sources and more: Through Project Syndicate, Robert Skidelsky, theorized how John Maynard Keynes would have reacted to coronavirus stimulus spending. Crucially, he says Keynes would also have asked how we will pay for the deficit. Next, The Washington Post had a good summary of the stimulus bill. And finally, for the GDP projection, The Atlantic discussed what might be coming.