A year ago, we looked at the vinyl comeback.

Since 1973, the number one spot for record format sales shifted from vinyl to CDs to digital downloads to streaming. Until 1984, vinyl’s share was more than one half but by 1999, it had plunged to .4 percent.

Now up to 7.4 percent from 6.6 percent last year, vinyl sales’ format share is still climbing (as of the first half of this year): 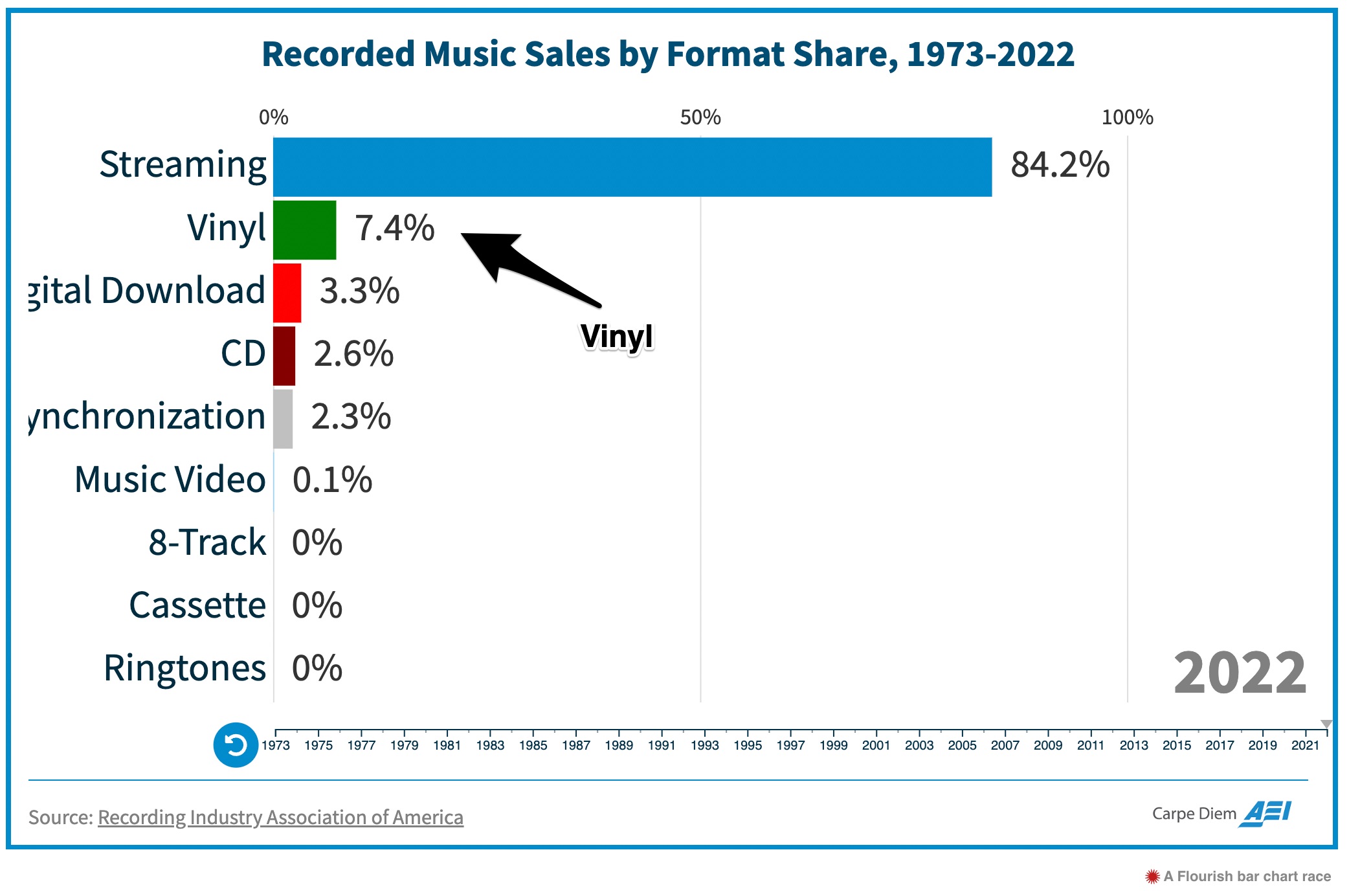 Looking closer, DJmag tells us that this year’s sales pop for vinyl was 22 percent and, the 21.8 million vinyl records that were sent out compared to 18.8 million for the same time period last year. Meanwhile, including a whopping 90 million paid subscriptions, U.S. recorded music revenue was at $7.7 billion.

During the 1970s, we bought vinyl, 8-track tapes, and cassettes. It took until 1991 for CDs to occupy the #1 spot and then 20 years later digital downloads took over. Amazingly, only 11 years ago, streaming represented just 9.2 percent of all recorded music sales. This year, it is a touch below 85 percent.

Although he died in 1950, economist Joseph Schumpeter (1883-1950) could have insightfully analysed the evolution of the music industry. As the scholar that first described creative destruction, Schumpeter told us that when entrepreneurs propel progress and productivity. they also create the pain connected with the demise of old industries as new products and processes replace what had existed.

Through creative destruction, autos decimated horse and buggy sales, the light bulb eliminated kerosene lamps, and typewriters disappeared. We could also say that creative destruction is the reason that new recorded music formats brought us convenience, quantity, and affordability.

We have to add though that streaming creates GDP headaches. At the margin, streamed music costs nothing for each extra song. For $9.99 a month, we can listen to the music that we used to pay for as records and cds. And that is the problem. The economy is producing a service that the GDP only partially recognizes. And yet, by definition, the GDP tells us the money value of all goods and services that we produce during one year.

My sources and more: My starting point for today’s facts and ideas was one of Mark Perry’s clever animated charts. They tell a story that thousands of words could not convey. Then, djmag.com had the vinyl record update while WSJ, here and here, and the BBC, had some recent history that we also used last year. Please note that some sentences from today were in past econlife posts.