For a feel good holiday story, I suggest you watch (as did I) Come From Away on Apple TV where a performance of the Tony-award winning Broadway show is streaming. In approximately two hours of captivating song and narrative, it tells how Gander, Newfoundland welcomed the thousands of people whose planes were diverted there on 9/11.

Until the Boeing 747 and other jets that could fly directly to their destinations, Gander, Newfoundland had been a refueling stop for transatlantic commercial and military aircraft: 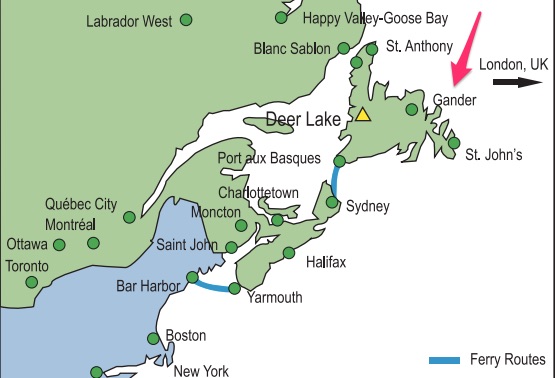 On September 11, 2001, an air traffic controller at Gander International Airport was told to “shut down the sky.” With U.S. airspace closed, 38 re-routed planes, mostly from Europe, had to land there immediately. Then, passengers had hour long waits before de-planing and their checked bags had to remain in cargo.

Meanwhile, Gander’s 9,650 (or so) residents soon had 6,579 adults and children to feed and clothe as well as 11 dogs, 9 cats and 2 bonobo apes (traveling from Belgium to a Columbus, Ohio zoo). They knew they needed blankets, toiletries, medicine, and a lot of food. It meant using the town’s hockey rink as the world’s largest refrigerator. Looking for translators, they asked who spoke what language. Striking bus drivers said they would return to work until the guests departed. A town located 90 minutes away sent over enough sandwiches and soup to feed 200 people. One person called the island “casserole city.”

In addition to churches, schools and community centers, residents welcomed travelers in their homes. Commander Gander entertained a group of terminally ill children flying to Disney World. Another group became honorary Newfoundlanders after they kissed a cod on the lips, donned sou’westers, and ate hard bread and pickled bologna. At the same time, onlookers banged an “ugly stick” covered with beer bottle caps.

This a rather blurry photo of the sleeping accommodations at Gander Academy: 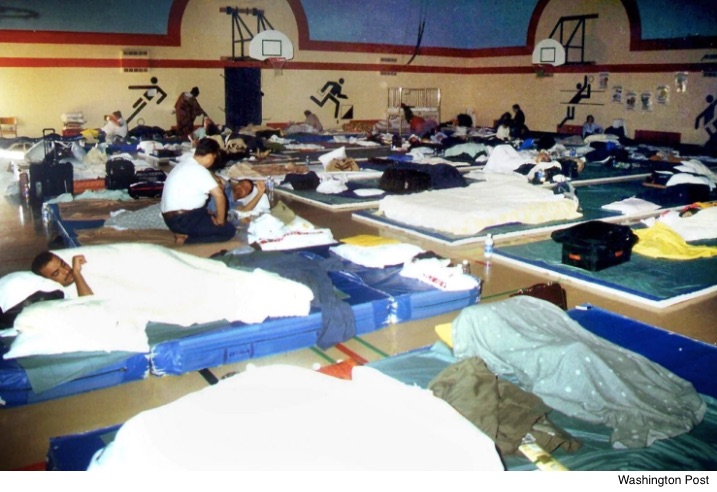 The Come From Away audience was charmed by Gander’s graciousness. Few (except me probably) realized this was also an economic story about land, labor and capital.

If economics is the science that shows how we solve the problem of scarcity, then Gander on 9/11 is the perfect example. Their population almost doubled. And yet, their land, labor, and capital took care of everyone.

Gander’s population stopped doing what it does everyday. Instead, they prepared huge quantities of food, they transported people and they re-allocated supplies, They had to translate multiple languages. One person became the TV “town crier” who told the town that someone needed a moose dinner or they had too much toilet paper. One bakery made a cake for 350 people. Another person went from house to house picking up the barbecues for cooking some of the meals in a central location. As for the animals, they too were cared for. One of the cats was even given the medication that was attached to her carrier.

The buildings became dormitories. The hockey rink was the refrigerator. With just 500 hotel rooms, homes became B&Bs. Banks of phones, computers and TVs were set up where groups of people could access them. School buses moved travelers and refrigerated trucks brought meat. Also defined as capital, their inventory ranged from food to new underwear to nicotine gum. And there were countless casserole dishes.

Perhaps the land itself didn’t really change but it was used in different ways.

So what did all of this land, labor and capital create? It displayed how wonderful people could be.

My sources and more: Of course, I learned most of my facts from the Broadway play, Come From Away. But I also found some good stories in CNN, the NY Times, and the New Yorler Magazine.

(Published several years ago when I first saw the play, today’s post is an edited repeat.)

How Our Pets Can Be Economic Indicators

Why Marijuana Prices Are Plunging