What We Can Learn From a Trout

It sounded like a good idea. If your fish population is dropping just spawn more in a hatchery and then deposit them back in their native waters.

The results were not quite what they expected.

Our story starts in the 1870s when New England’s Atlantic salmon became increasingly sparse. Responding, the Congress established a U.S. Fish Commission and from there we got fish hatcheries. All they had to do was grow fish in tanks and then deposit them in depleted waterways. They thought it was win win. More fish for sport, more to eat, and no need to conserve.

The rest is history.

Having hatched (sorry) a seemingly viable approach, it multiplied. We wound up with hatcheries for fish like shad, bass, and trout. We had hatcheries with rainbow trout from the West, brown trout from Europe, and the brook trout from the East. After their young were born, the Western fish could be transported to the East, the Eastern stock to the West, and the European trout across the U.S.

At first, baggage cars were retrofitted for the trains that moved the fish around the U.S. Once, when a railway bridge collapsed, 300,000 fish (including perch, bass, trout, and lobsters) accidentally found a new home in Nebraska’s Elkhorn River. Today, with trucks and even helicopters, New Hampshire alone stocks ponds and rivers with more than a million trout. 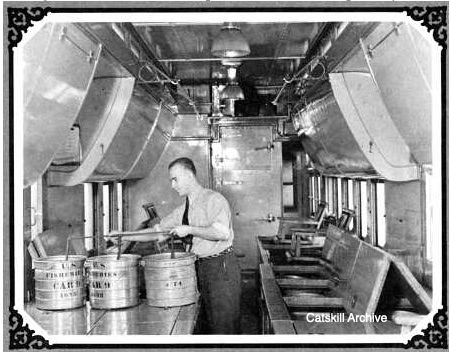 This is where the problems start. When hatchery-raised trout are brought to a natural habitat, they can upset the existing order. They might eat the offspring of the wild fish and compete for the food supply. They also can bring disease. As for their own survival, many die when they are not as healthy as the local fish population. Associating overhead shadows with the food “delivery” they got in a hatchery, the trout swim upward only to be greeted (and eaten) by a bird or animal on the surface. The result is a ripple of consequences affecting the local animals that feed off the local fish. I read one example where the osprey and even the bears had to adjust.

However, offsetting the problems that they present, Outside/In tells us that, “…abundant, easy to catch fish, get people excited about nature, and protecting it.” They quote recreational advocates who say,  “We stock fish because we want people to fall in love with them.” They remind us that for young people to start to experience the joy of fishing, they need the local ponds that have the population. Then, not even caring if they catch a fish, they move onward to more remote locations.

So you see we have a dilemma. We have recreation and conservation. We have the fishing advocates who believe more fish make people care about fish. But there also are the habitat concerns.

As economists, we can return to tradeoffs. Indeed, even a trout teaches us that there is no free lunch.

Do enjoy this delightful video:

My sources and more: Listening to the Outside/In podcast yesterday morning, I especially enjoyed my morning walk. If you want more, the story of the railroad fish car and a Fish Commission timeline are possibilities. My choice though is this NY Times article from 2012 for the fish hatcheries debate.

Our featured image is from Outside/In.

When Marijuana Causes a Car Crash