If every light is green and traffic is sparse, my morning drive to work takes 17 minutes. But that never happens. Typically it occupies 34 minutes.

The Texas A&M Transportation Institute tells me that I am typical. But it’s not just me. It’s all of us.

Where are we going? To the huge cost (defined economically as sacrifice) of congestion,.

The Cost of Traffic Congestion

Just multiply my extra minutes by millions of commuters and you get billions of wasted hours and massive amounts of squandered gasoline. Then, we can add those billions to what truckers contribute. While they compose just 7% of road traffic, they are responsible for 12% of the cost of congestion.

Low unemployment is one reason we’ve got a congestion crisis. Just from 2016 to 2017 we added 1.9 million new jobs to the U.S. economy. More jobs mean more commuters which mean more congestion. The numbers display the correlation. During the past five years, travel delay went up by 14% and we wasted 3% more fuel. Far higher than the average, the cost of truck congestion is up 40%.

Perhaps more invisibly, the estimated delay time went up even more on local streets (like the ones on which I commute) than on freeways: 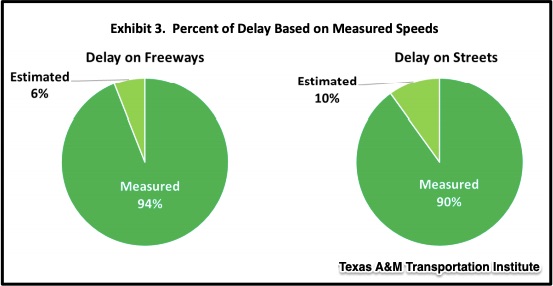 The spillover from low unemployment is more commuters. But also, thinking of Say’s Law that says supply creates its own demand, as workers produce goods and services, they get paid, they become consumers, they spend their income, and they place more Amazon orders. Their delivery takes us to truck traffic on the side streets where they complete their “last mile.” It also adds to our anxiety–a cost because we sacrifice calmness– first, when we plan an arrival time for an appointment, and then after when we sit in traffic.

So, returning to where we began, my morning commute creates an externality that I impose on you. We could say that rush hour is when all of our negative externalities converge.

Maybe better roads will help? xkcd has a suggestion:

My sources and more: My go-to site for transportation news, the Texas A&M Transportation Institute, had a recent Urban Mobility report and this summary.

Six Facts About Women's Wealth in the World