Reading about “touch generations” in Sam Arbesman’s Wired Magazine blog, I realized that Abigail Adams and Janet Yellen were connected.

Different generations touch when one’s birth year coincides with someone else’s death. Born in 1744, Abigail Adams died in 1818, the year that Karl Marx was born. Marx lived until 1883 when John Maynard Keynes was born. And our new Federal Reserve Chairman Janet Yellen entered the world in 1946 when Keynes passed away.

Talking about touch generations, Arbesman offered some thoughts. Even if we looked at 1000 years, the number of touch generations is just 15. And for the 270 years between 1744 and 2014, we only have 4.

So yes, Abigail Adams and Janet Yellen are connected through Marx and Keynes. Also though, Abigail Adams was a successful capitalist. Because John Adams was rarely home, during and after the Revolution she skillfully ran their farm and made a lot of money by trading bonds and currency.

I like to think that Abigail Adams is stretching across Marx and Keynes to touch Janet Yellen.

Finally, while new generations slowly touch, here is the pace of technological innovation: 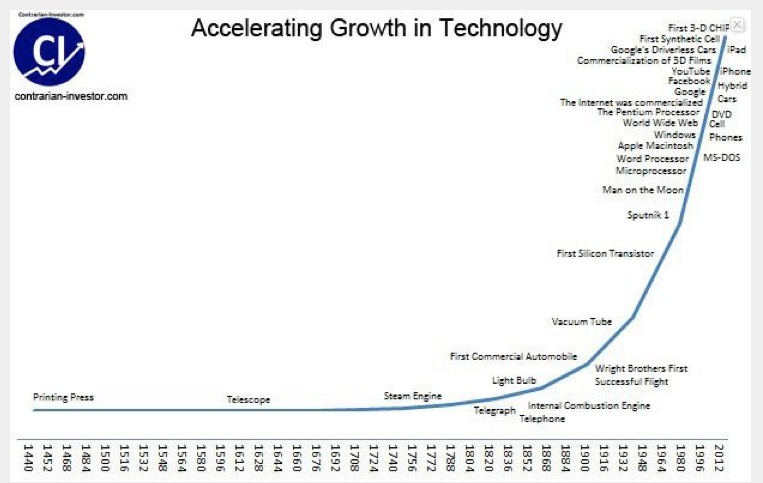 Sources and Resources: I recommend Samuel Arbesman’s thought-provoking blog,Tyler Cowen’s book The Great Stagnation for its contrarian outlook and this seekingalpha article was the source of my graph. Finally, I just discovered the Woody Holton book, Abigail Adams, Capitalist and plan to read it. The review of his book indicates that Adams’s uncle implemented her financial transactions since a woman could not.

The Green Blog: Why Japan Might Face a Demographic Crisis

One Reason That We Have Nutella