But some believe it’s not difficult to make stock market predictions when the S&P 500 and the Dow continue going up. (I’ve inserted the arrow.):

In 1929, two famous economists thought they could predict the direction of the Dow. Basing their expectations on business cycles, each one thought he could figure out when a recession was imminent. During the 1920s, each believed the moment to sell was just before the downturn began. 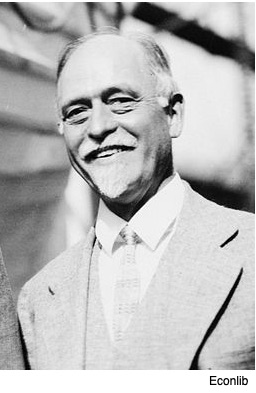 Irving Fisher (1867-1947) was a Yale professor, a mathematician, an economist, a columnist, an inventor, an investor, and a health zealot who ate salad for breakfast, drank no coffee, no tea, no alcohol. Because he thought (and said) that, “Stock prices have reached what looks like a permanently high plateau, he lost his entire fortune– maybe $10 million–during the October, 1929 crash. After, pursuing an investing strategy that continued to predict the business cycle, he never made it back. 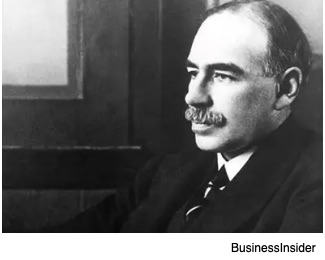 Meanwhile, on the other side of the Atlantic in Great Britain, an equally auspicious economist also expected to outsmart financial markets. John Maynard Keynes (1883-1946) was the offset to Adam Smith. In the midst of the 1930s Great Depression, he explained that laissez-faire was not always best when a bit of government could help to “prime the pump” until all was well again. Since then, we’ve all become Keynesians. However, in 1929, Keynes, like Fisher, misjudged the economy’s trajectory and lost millions. He though changed how he invested, amassed a new fortune, and concluded that forecasting business cycles was impossible.

According to University of Pennsylvania finance Professor Jeremy Siegel, investors who  “switched from stocks to cash four months before the beginning of a recession and back to stocks four months before the end of the recession…” would accelerate their gains considerably. The problem is that no one can time the switch because (like Fisher and Keynes) recession forecasters have a dismal record.

In his book, Stocks for the Long Run, after charting how stock prices echoed the business cycle (below), Dr. Siegel warns us that we won’t beat the stock market by trying to predict the economy: 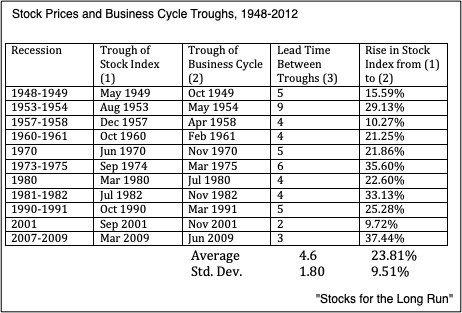 As the group that formally identifies business cycles, the NBER (National Bureau of Economic Research) tells us that the length of our current expansion has surpassed the March 1991 to March 2001 120-month record holder. The current expansion began with the June 2009 trough. At the end of the expansion it will peak, contract, trough at the bottom, expand, and go through the cycle again.

It took until September 2010 for the NBER to confirm the Dec. 2007-June 2009 recession. So you can see why, “It’s tough to make predictions, especially about the future.”

My sources and more: First, the Cautionary Tales podcast and then the NY Times and Dr. Siegel (Chapter 15) all looked at forecasting. As for the business cycle, the NBER website is the place to go for all the facts you could possibly need.

Where Illegal Activities Give the GDP New Highs