Why We Have a Chores Gap

Women have been climbing the career ladder: 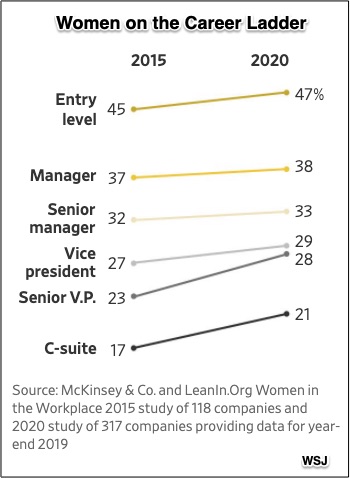 But their ascent might have been slowed by the pandemic: 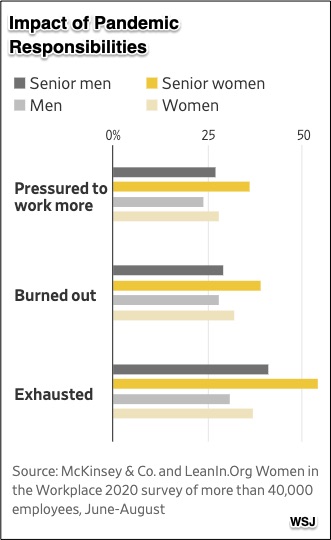 To some extent, we can blame the cleaning:

Three researchers asked why women clean up more than men.

We could have a home chores gap because of what boys and girls internalize when they are socialized. A second possibility comes from the outside through a couple’s “gender display” that shows they adhere to gender norms. However, it can be tough to distinguish between the two kinds of motivation.

Shown a messy and a neat home, men and women describe them the same way. Asked to rate the messiness on a one to 100 scale, gender did not matter. There was little difference between how men and women perceived messiness and its importance

The difference though was what happens afterwards.

The response to the tidy home reflected a higher standard for women. Occupied by “John,” the room was judged neater than when it belonged to “Jennifer.” Respondents also indicated that “Jennifer” was more responsible for the cleaning and would be judged negatively for less than adequate housekeeping.

The results for the messy rooms were not as definitive. Surprisingly, the women were criticized less than the men. Researchers thought that seeing a messy room made respondents think of negative male stereotypes and wanted “John” to clean up.

As a whole though, the results of the survey among 622 respondents confirmed the importance of a gender display. Even when a woman has an auspicious job (and her spouse might not) with a high opportunity cost for cleaning, she still feels she has to keep it tidy. Otherwise, society will believe she could be insufficiently “hardworking” and less “moral.”

Our Bottom Line: Division of Labor

In his Wealth of Nations (1776), Adam Smith focused on one pin factory to show how a division of labor saved time, elevated production, and diminished each item’s cost. Smith told us that one worker, alone, might not even produce a single pin in a day. But when 10 workers divide 18 different tasks and each one specializes, output soars to a whopping 48,000 pins a day.

Then, taking somewhat of a leap, Nobel Laureate economist Gary Becker moved the division of labor into the home. Comparing the household to a little factory, he said the husband and wife had separate responsibilities. One made the bacon and the other brought it home. Their output–the kids–was the result.

Since Becker’s 1960s paper on at-home division of labor, the development of the “pill” let women decide when to have children, how long to attend school, and what career to pursue. As a result, in the home, Justin Wolfers and Betsey Stevenson tell us that couples became companions.

Still though, women, not men, are doing more housework.

My sources and more: Always interesting, the WSJ Numbers Lady returned my thinking to the chore gap. From there, this paper on housework explained some of the gap and this WSJ article looked at the impact. (Please note that my pin factory description was in a past econlife post.)