Thirteen years ago, Kalamazoo, Michigan started giving free tuition to its high school grads. The program was funded by a group of wealthy families who believed they could reverse their city’s economic decline with education. They thought free tuition would attract talent to the city, boost workforce skills, and help struggling households. Good for 100% tuition at all of Michigan’s public colleges and 15 of the state’s private colleges, the grant was for everyone.

But everyone did not benefit.

The Impact of Free Tuition

The deal was you had to have attended Kalamazoo’s schools since kindergarten or at least for a mandatory four high school years. Less and you got less based on a sliding scale. Then, to retain the subsidy, your college grades could not drop below a 2.0 average in 75% of your classes.

College enrollment was way up: 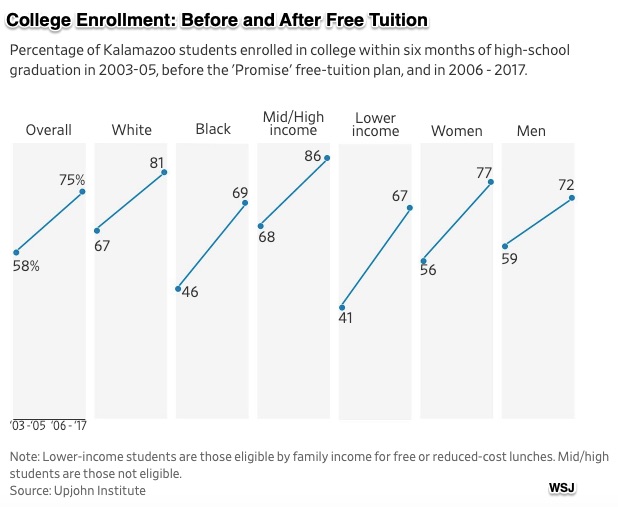 But people were not necessarily graduating: 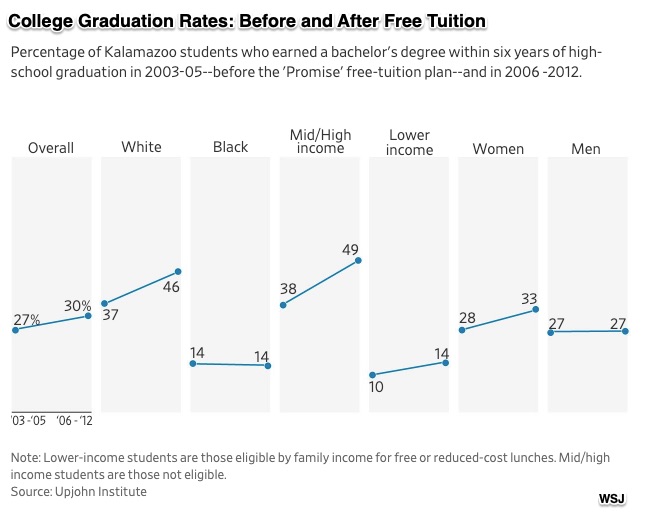 Explaining the results, a study group said that free tuition revealed other barriers. Initially hidden, those barriers became evident once college was subsidized because a higher proportion of students from lower income groups was not graduating with a degree. Faced with teen pregnancy, single parent households, and homelessness, students might have families to care for, find college overwhelming, or have been insufficiently prepared for higher education. Tuition was just one of the different kinds of support they needed (that Kalamazoo has begun to provide).

When economists talk about human capital, they mean the skills, the education, the intangible tools we acquire that let us do a better job. Just like more physical capital increases our productivity through labor saving tools so too can more human capital.

It all sounds so easy. Just make education more accessible and you increase human capital. But the Kalamazoo program displays that it’s much more complicated. Free tuition can lower a financial cost. However, there are other social costs that could make college too “expensive.” As one researcher commented, discovering those hidden costs is like peeling an onion. “…You take away the outer layer—financial need. Once that’s gone you see these other layers, or barriers, are left. The inner layers are problems you wouldn’t have known are a big issue.”

My final thought? We need to determine our goals. Free undergrad tuition can eliminate a vast proportion of student debt. (You still have living expenses and books.) However, if equity is our objective, then we need to worry about the “onion.”

My sources and more: Thanks to WSJ for alerting me to Kalamazoo’s free tuition initiative. There is more at NPR and do look at how Kalamazoo describes its “Promise.”

When a Parking Ticket Is Unconstitutional