An Innovation That Stuck

In 1968, a chemist, who failed to do what his bosses asked for, accidentally wound up with something better.

He was supposed to create a super strong adhesive. It did not quite work out that way.

Our story starts in a lab at 3M. The multinational corporation that makes our Scotch Tape wanted glue that would be used for making airplanes. Instead, Spencer Silver accidentally developed an adhesive that could easily be unstuck without damaging a surface. Recognizing it had no use, Dr. Silver said the adhesive was “a solution waiting for a problem to solve.”

Six years later, at church, another 3M scientist figured out the problem. During Wednesday night choir practice, Arthur Fry marked pages in his hymnal with little paper scraps. By Sunday, when he needed them, they were gone. His “eureka moment” came when he recalled the adhesive with the “removability characteristic.” Soon he had reliable bookmarks that were also handy as office memos. And so, the Post-it Note was born.

It took several years for the actual product to be developed, marketed, and for the idea to stick. They called their first round of try outs with free samples the Boise Blitz because it took place in Boise, Idaho.

Below are Drs. Silver (left) and Fry: 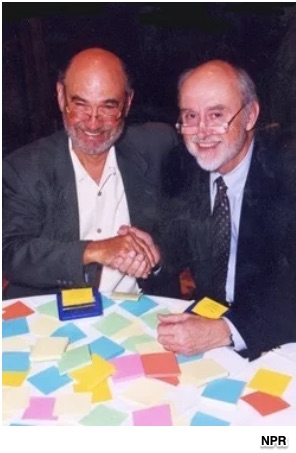 According to a 2018 Quartz Weekly Obsession e-mail:

Long ago, Edwin Mansfield (1930-1997), a University of Pennsylvania economist, said that a seemingly small innovation can have a large impact through its private and social return. While he was referring to manufacturing inputs like thread, he could easily have been talking about a Post-it Note. Its private return will go to 3M, and Drs. Silver and Fry. But then, the social benefit ripples across millions of individuals who remember more and waste less time.

What began as a bookmark became a whole new way to communicate.

My sources and more: Thanks to Bloomberg radio for alerting me to Spencer Silver’s death and to NPR and The Washington Post for more of the story. However, 3M had the most detail and Quartz had the 2018 update. Then, I suggest taking the next step by reading about Innovation Clusters. 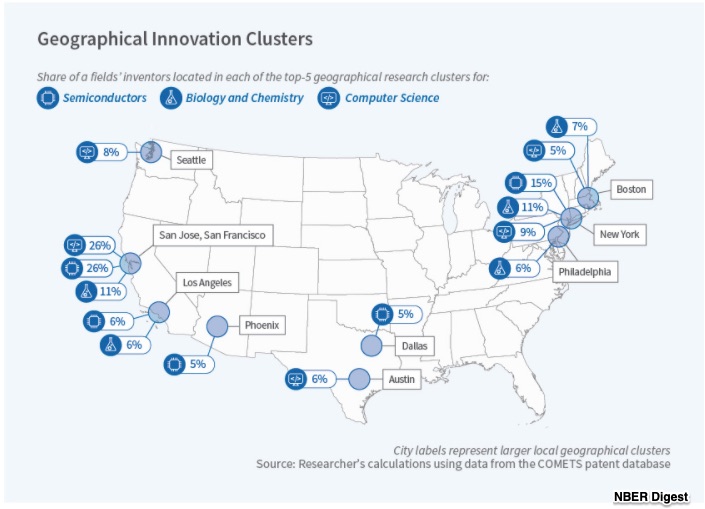