Nantucket’s pizza competition is very different from almost everywhere else.  I’ve been told that my favorite place for pizza, Pi Pizzeria, has a 50% market share. Meanwhile, the island’s other three or four restaurants that mostly make pizza split the other half.

Where are we going? To pizza markets.

In most of the U.S., the pizza market is about big and small. The big side is Domino’s and Pizza Hut. And yet, each of us could also name a small pizza restaurant located near us.

You can see that the big chains command more than half of the market: 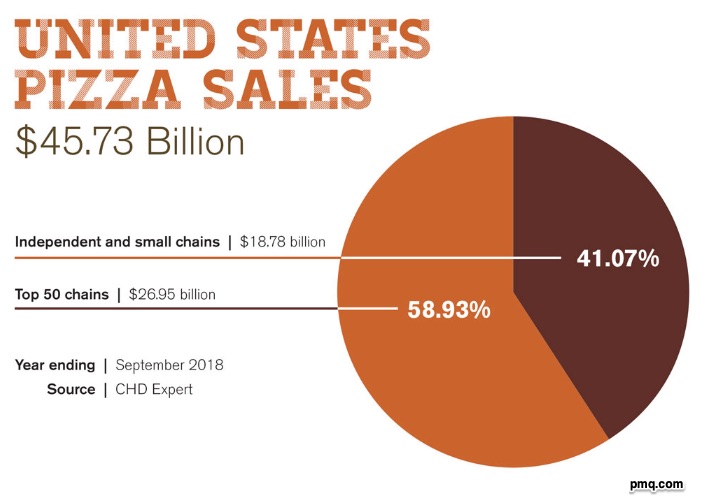 Among the top 50 chains, Domino’s is #1 with global sales that total close to $12.25 billion while Pizza Hut, at approximately $12.03 billion is close behind. Then, with Little Caesar’s and Papa John’s in third and fourth place, we leap down to $4 billion each.

Reading about the two groups, I got a very different sense of how they attract us. The larger chains are talking technology. They make online ordering easy and are experimenting with robotic delivery. Domino’s has even called itself an e-commerce company that sells pizza. At the same time, the Independents are benefiting from a more sophisticated pizza consumer that cares about fresh, local, and organic.

Here you can see that where you live determines the pizza you most prefer: 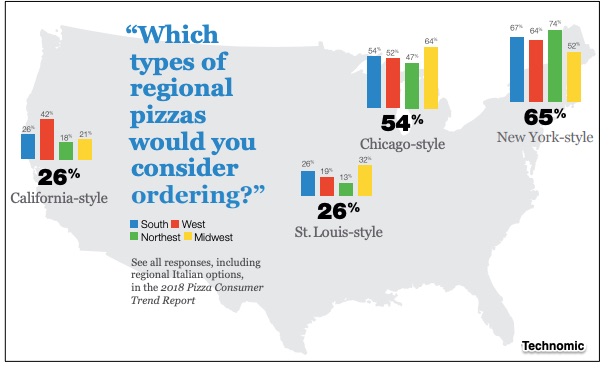 As economists, we can return to our continuum of market structures where, moving from left to right, firms grow larger and more powerful. With perfect competition, we find markets populated by many small firms that produce almost identical products such as potatoes or asparagus. Next, monopolistic competition takes us to businesses that are somewhat larger like hair salons and supermarkets. Hair salons, for example, produce many of the same kinds of items (hair cuts) but have something distinctive (a certain stylist) that gives them some pricing power and product differentiation. Then with oligopoly we have several large firms that are dominant and finally, at the other end, just like the game, monopoly takes us to single firm dominance.

Pizza is in the monopolistic competition range.

But not Pi Pizza. When you produce incomparably delicious thin crust wood fired pies on an island, you wind up with more of a monopoly.

My sources and more: The 2019 Pizza Power Report and Pizza Today are good starting points for learning about pizza markets. I also recommend WSJ for more on Domino’s and Adage to confirm that Domino’s was #1 in the U.S. and globally.

The Countries That Return Lost Wallets

June 2019 Friday's e-links: From the Jamestown Colony to Working Mothers and Commencement Speeches