March Madness is a brand. As a trademarked phrase, it represents more than a tournament. It is a massive moneymaker that creates excitement, rivalries, and riveted viewership.

At this year’s tournament, the men are in Indianapolis and the women, San Antonio. Not only are their facilities separate but they are very different. Shown below, an expansive men’s workout room is fully equipped while the women (for 64 teams) have a dumbbell rack, an exercise bike, and a yoga mat: 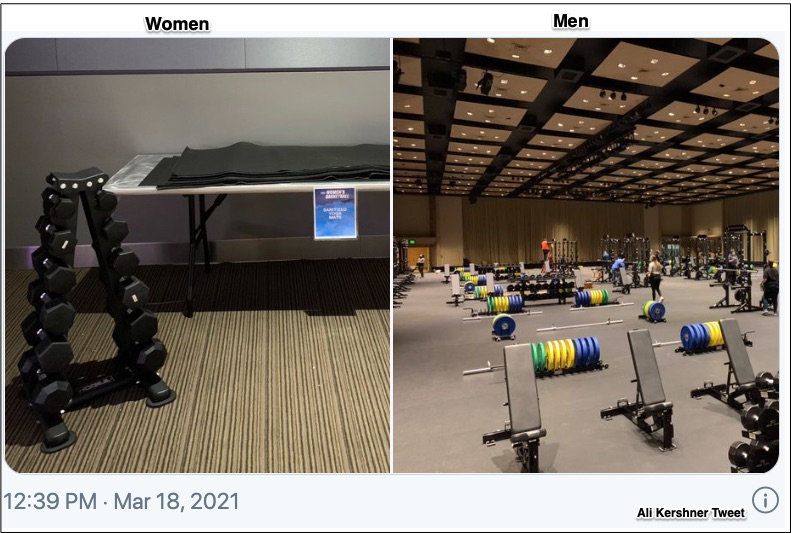 Meanwhile, the March Madness label has been withheld from the women’s side of the tournament. In Indianapolis, it dominates the courts, In San Antonio, it merely says, “NCAA Women’s Basketball.” The NCAA has confirmed that their contracts permit them to use March Madness for the women too. But they do not.

The court in San Antonio:

Following the same pattern, the men have state-of-the-art Covid testing and the women are given an antigen test that is cheaper and more inaccurate. At the men’s dinner, the buffet included steak, grilled asparagus, potatoes au gratin, chopped salad, and carrot cake. The women got a plastic container with three soggy veggies, mashed potatoes, and a mystery meat. Even the swag bags are different. Yes, the women’s are much smaller.

Much of the NCAA’s cash comes from a billion dollar contract with CBS and Turner for the men’s play while a much smaller ESPN deal covers multiple events that include the women’s games. Then, the NCAA streams revenue toward the men. If, for example, No. 1 seed Gonzaga wins, more than $10 million goes to the West Coast Conference. The NCAA doesn’t allocate cash for a female win.

The source of NCAA revenue:

When gender disparities perpetuate themselves, an economist might say the reason is confirmation bias. Confirmation bias occurs when an outcome is the result of what we expect. In a legendary primary school experiment, teachers expected blue-eyed children to be smarter, and they were. When they switched to brown eyes, so too did the brains. With athletics, we expect the women to generate less income and excitement so they do. If we believed the opposite, we would make it happen.

My sources and more: The NY Times was one of many to document NCAA gender inequality. From there, I discovered at WSJ that even the name March Madness was unequal. Then for the finances, Sportico had the details while Slate had the background. Finally, I recommend taking a look at this report on female NCAA coaches