In Taiwan, for two days, people whose name was “salmon” (and five of their friends) got all-you-can-eat sushi. Offered by a sushi restaurant chain, the promotion created “salmon chaos.” Because you just needed an identity card that included “gui yu” (the Chinese characters for salmon), more than 200 people officially switched their names. Choosing an ID that was perhaps, “Salmon Fried Rice” or “Salmon Prince,” one student said he returned to eat 15 times. A young woman said her “new”name was “Kuo Salmon Rice Bowl.”

Since the government permits up to three name changes, I assume it wasn’t permanent.

Where are we going? To the incentives that spur innovation.

In a 2020 NBER working paper, researchers described how an innovation contest could optimize incentives. They wanted to find out if winner-takes-all or top-10 prize sharing generated more creativity.

You can see below that winner-take-all won: 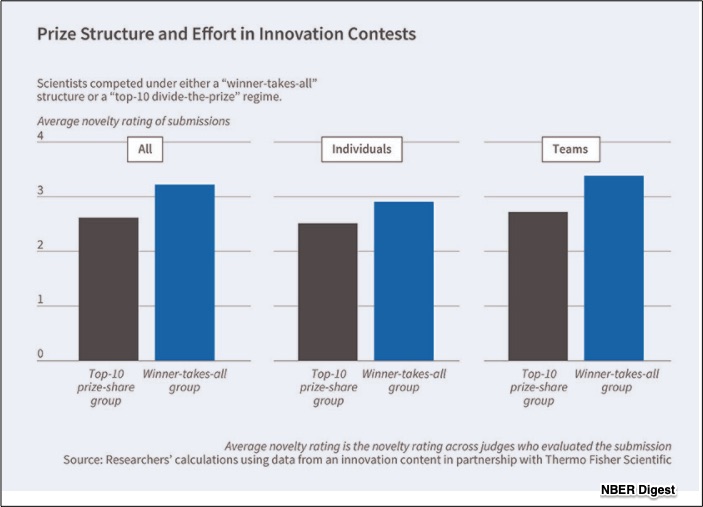 In the experiment, there were 184 participants that were divided into two groups. The winner-take all half was told a $15,000 prize would go to the individual or team that had the best solution. (The problem was how to disseminate technology to small firms in Mexico.) The people in the other group would share the prize, dividing it among 10 winners where $6,000 would go to first place, and then decreasingly smaller amounts. The criteria were quality and novelty.

Researchers concluded that winner-take all encouraged more risk taking and risky ideas. However, the real difference came from the decision to work as a group rather than individually. Only then were the participants able to access a variety of talents that generated the most novel solution.

For the rapid development of a Covid-19 vaccines, the U.S. government had to decide the optimal incentive. One answer was the massive amount of financial support that formed a synergy with existing research. The goal was to remove the individual firm’s financial risk.

The bigger question, though, as we move forward, is how to incentivize ingenuity. Throughout history, governments have implemented policies that included patents and subsidies, prizes, bounties, monopoly protection. In a 2015 NBER paper, a Bowdoin economist suggested that history proved prizes were not the answer. Instead, she cites the U.S. decision to go with a patent system. Protecting intellectual property, patents created a market orientation that generated innovation from the 18th century onward. The market’s incentives were more crucial than what a jury or judge might offer.

Returning to our winner-take-all study, we also have individual firms that have to decide how to encourage innovation. Then, we have a group providing the varied skills and a huge payoff, the incentive.

Let’s conclude though with a wonderful quote from one of the papers. “Genius is not created by incentives, but empowered by them.”

My sources and more: Having seen the salmon promotion on Marginal Revolution, I checked the impact of a contest structure on innovation. From there, it was helpful to have the historical perspective offered by this NBER paper. I also was curious about the Covid-19 vaccine connection.

Why The Gas Tax Could Disappear