In Beijing, unpaid housework just got a price.

Because of their new Civil Code, a Chinese judge decided that a divorce settlement had to include compensation for the former wife. He said that in addition to monthly alimony, she was due a 50,000 yuan five year payback for unassisted childcare and household work. People are protesting though that the amount, equal to $7,700 or £5,460 is much too small.

Sadly, the situation in China is typical.

According to the OECD, the gender divide for unpaid work is a global norm. In China, at four hours, women, do 2.5 times as much unpaid work at home as men. At the same time, throughout South Asia, the Middle East and North Africa, the gap is even bigger: 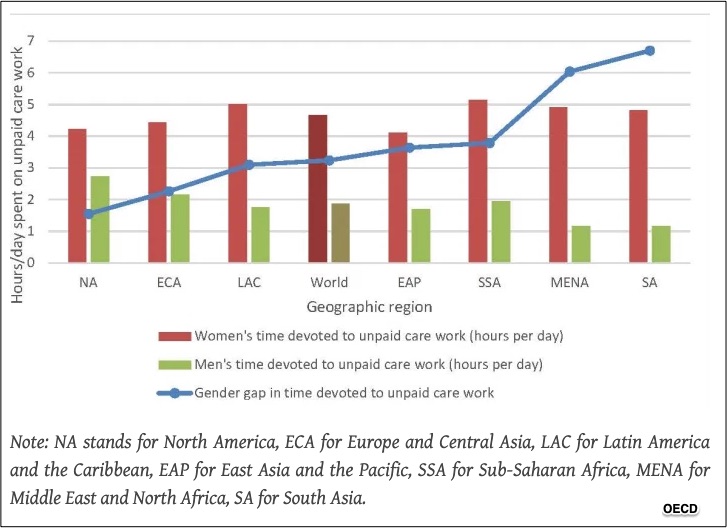 As for the dollar value, FRED (Federal Reserve Bank of St. Louis) multiplies the average amount of unpaid work done by women above age 16 at home (26.7 hours a week) by the minimum wage. They wind up with a total that would have been 86 percent of New York State’s GDP during 2018. The total would be far larger if they were not using the federal minimum age–$7.25–for their calculations.

When Nobel Laureate Simon Kuznets first created the GDP concept during the 1930s, he decided that only market based paid work could be included. Since there was no market metric for work done at home, it was not counted. Remembering that we “treasure what we measure,” we wound up undervaluing childcare, elder care, grocery shopping–all you do to run a household. In The Price of Everything, NY Times journalist Eduardo Porter suggests that when more women went to work outside the home, their labor became more valuable because home work acquired an opportunity cost. Defined as the sacrificed alternative, the opportunity cost had a dollar value.

Returning to where we began, I wonder if housework–now that it has a price–will become more valuable in China.

My sources and more: During my daily walks, in addition to the WSJ and Axios podcasts, I now go to the BBC Global News. For a different perspective and interesting stories, it is excellent. Today, I started with the BBC and then continued onward to the OECD, FRED, and The Washington Post.  In addition, the BBC had the online version of the China divorce story.