The McDonald’s response, though, is not quite what economists would have expected.

Traditional economic theory suggests that employers respond to an increase in wages with fewer jobs and work hours. To find out whether tradition remains valid, two economists gathered gargantuan information from McDonald’s for five years. Their focus was McDonald’s “Basic Crew”–the group that earned a minimum wage. Their data came from approximately 10,000 outlets that were in malls, Walmarts, and freestanding. They considered 300 minimum wage changes that included 42 cities with their own minimum wages. You get the picture. They had a huge amount of data.

From here, they asked if labor saving technology paid for the extra expense. In 2017, only 20 percent of all McDonald’s had touch screen ordering kiosks whereas 75 percent had them in 2019. However, the timing of the increase did not correspond to minimum wage changes. So they concluded that even though the new equipment saved labor, its purpose was not to offset the cost of higher wages.

This is where we have our big surprise. You and I paid for the minimum wage hike. The researchers found a correlation between the price of a Big Mac and a rising minimum wage. When one went up so too did the other. As economists, we can say that there was a pass-through of the wage increase to the customer.

Our Bottom Line: The Circular Flow of the Big Mac

Usually when referring to the minimum wage, we draw a floor and display the potential for job losses that traditional economics suggests. To see our graph, do take a look at this past post’s “Bottom Line.” Today, instead, let’s just use our Circular Flow Model of a market economy to picture what is happening at McDonald’s when the minimum wage goes up.

Below, the dollars circulate around the outer arrow and the Big Macs are represented by the inner circle. As you can see, households send land, labor and capital to businesses from which they make Big Macs. Then, businesses sell those Big Macs to households.

In product markets businesses raised the prices of their Big Macs after they increased wages in factor markets: 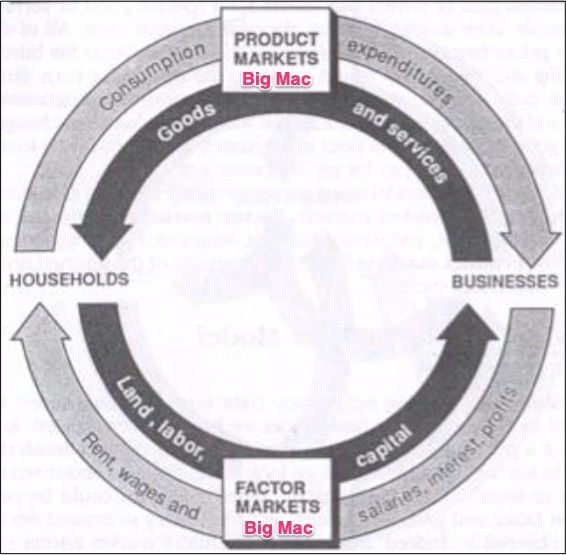 Moving from McDonald’s to the U.S. economy (but sticking with the same circular flow model), if the federal minimum wage rises to $15 by June 2025, then product and factor markets would be affected. For the upper loop, the CBO predicts higher prices for goods and services but also it expects the lower loop will see a boost in employment and incomes.

My sources and more: Thanks to the Hutchins Roundup for alerting me to me to the new McDonald’s paper in their email newsletter. From there, the new CBO report was helpful as was a Planet Money summary of the McDonald’s paper.