Not an iPhone, not an iPad, the newest apple is the Cosmic Crisp.

Like all Apple products, it is the result of years of scientific research.

Washington’s apple growers knew they could no longer depend on the Red Delicious. It stored well, tasted okay, and used to be what supermarkets wanted. But its sinking popularity meant the growers needed a substitute. At Washington State University, for more than 20 years, they’ve been developing one.

To invent a new apple, first the WSU scientists had to identify the crunch, juiciness, flavor, color, and durability they wanted. That led them to the Honeycrisp’s sweetness and the Enterprise’s color and durability. Next, to get the hybrid seeds, Honeycrisp pollen was brushed on Enterprise flowers. However, like children in one family differ, apple seeds from the same parents vary. So they grew lots of trees, and tasted and tested. After the perfect apple “was born,” it got patent and trademark protection and a name. 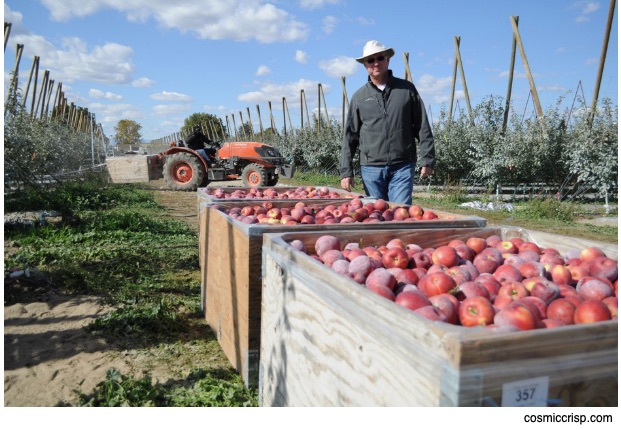 Yesterday, the massive launch began. All from the state of Washington, apples from 12 million Cosmic Crisp trees will arrive on our grocery shelves. And those apples and many more, will be controlled by Washington State University. Through licensing agreements, farmers will need to pay to grow them. Having spent millions to develop and market the apple, Washington State University hopes for a return of $100 million.

And it’s because they created more than an apple. They are growing a brand.

Traditionally a product of perfect competition, the apple had many farmers who produced identical fruit. As a result, the market determined the price.

Knowing that we will pay more for an apple that we like, the growers sought to develop and brand new varieties. With an Australian trademark, the Pink Lady arrived during the 1990s. Many unique apples followed her but none had as large a launch until the Cosmic Crisp.

Below, I’ve positioned the Cosmic Crisp in a monopolistically competitive market. Combining monopoly and competition, monopolistic markets have products that are unique but also similar to each other. Their unique characteristics give sellers more pricing heft:

Indeed, whether looking at apples with bites or bytes, we can find producers that want more market power though a unique identity.

My sources and more: For a good up-to-date listen about the Cosmic Crisp, I recommend The Sporkful, The Allusionist, and The Indicator. Then, to see how Washington State University is limiting production, Geekwire had the story. Meanwhile, FT told about the launch and this Cosmic Crisp website completed the picture.

Our featured image of Cosmic Crisp apples is from The Sporkful.

Why Our Movie Theaters Will Change