Rhode Island has more black sea bass while there are fewer off the coast of North Carolina. The Bering Sea has been losing its pollock, cod, and halibut. And, in West Africa, the fish near Dakar are moving toward Mauritania.

Unhappy and less healthy in warmer water, fish populations are looking for a new home: 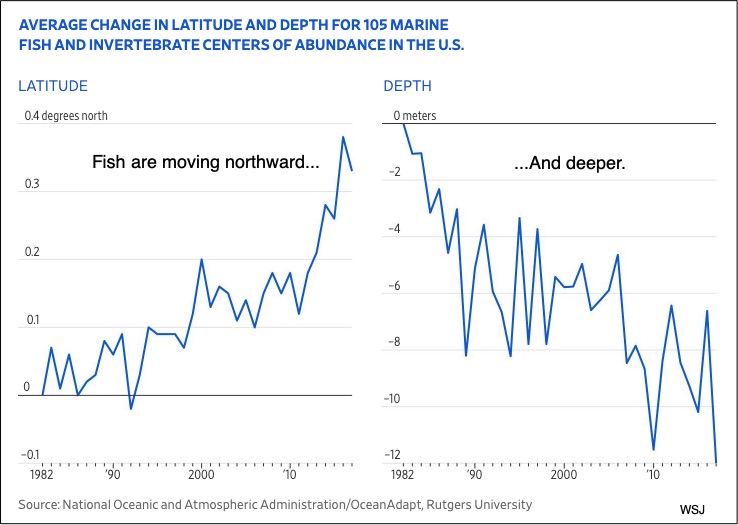 Where are we going? To where warmer waters create maritime conflict.

After leaving a fishery co-managed by Norway, the Faroe Islands, and the EU, mackerel wound up in Icelandic water. The previous co-managers declared that Icelandic mackerel could not enter EU ports because Iceland unilaterally declared a mackerel quota. Great Britain even said that Iceland was stealing its fish.

At the same time, the capelin that Iceland’s cod eat have begun to leave for cooler water. It’s worrisome because cod is one of Iceland’s billion dollar industries.

You can see that we are looking at the impact of climate change on fish populations.

But from there, a ripple of externalities affects countless uninvolved third parties. Yes, we are talking about species survival, a food supply, jobs, and economic sustenance. We are focusing on multi-billion dollar fish like a pollock that is breaded into sticks, macerated into paste, and ground into animal feed.

Also, we are talking about conflict.

Researchers theorize that fish migration will boost the number of maritime disputes between democracies. The authors of a new study hypothesize that the reason could be that fishing relates to “security, survival, and wealth.”

And they suggest that global warming will only make it worse.

My sources and more: As did I, you might enjoy moving from a NY Times article about Iceland’s fishing disputes to global fish migration. For specific information, WSJ had more on the U.S., this paper focused on maritime conflicts, and this article had the mackerel story.

Our featured image, of cod, is from the NY Times.