In 1985, Coca-Cola thought the world wanted a new taste for Coke. This was the reaction:

After only 79 days, the firm announced that the original formula would be back on the shelves. New Coke was supposed to become a distant memory. But now it has a starring role in a Netflix series.

Where are we going? To the New Coke story and competition.

When Robert Goizueta became Coke’s CEO in 1981, the Pepsi Challenge was growing. Whereas in 1955 Coca-Cola sales were double those of Pepsi, by 1984 Pepsi was behind by only 4.9 percent. Furthermore, the combined sales of Diet Pepsi and Pepsi Light exceeded Coca-Cola’s Tab.

Coke decided the time had come for some taste testing through their top secret Project Kansas. However, assessing the consumer’s reaction to a new formula was somewhat tricky because no one could say that the goal was a replacement. Still though, the results were conclusive. People liked the new flavor and Pepsi drinkers even said they might switch.

There were satellite hookups around the country with film crews and journalists awaiting the big announcement. From New York’s Lincoln Center a razzle-dazzle media extravaganza unfolded with the Grand Canyon, old Coke commercials, wheat fields, and cowboys. From the stage in front of an audience of seven hundred, Coke’s CEO exclaimed, “The best soft drink, Coca-Cola, is now going to be even better.”

All appeared to go well until the questions began. Asked one reporter, “Are you one hundred percent certain that this won’t bomb?” Another said, “… if we wanted Pepsi, we’d buy Pepsi.”

The reporters’ questions at Lincoln Center foreshadowed a public outcry. Two months after the announcement, eight thousand telephone calls poured in daily. During a sports event at the Houston Astrodome, people booed the new commercials that flashed across the viewing screens. 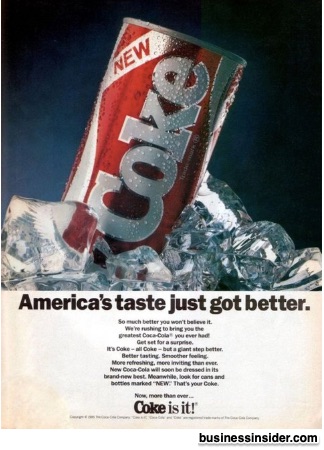 Within weeks, they knew they had made a monumental mistake. CEO Goizueta, said that after he announced Coke’s decision, he slept like a baby: “I wake up crying every hour.” Quickly, they sought to minimize the damage. The decision was made to retain new Coke as a “sister” to the older version which henceforth would be known as Coke Classic.

When asked by a reporter whether he would have proceeded with New Coke had he known the furor that would  reverberate across the nation, Roberto  Goizueta, replied with a Spanish proverb: “Si mi abuela tuviera rue das, seria bicicleta”—”If my grandmother  had wheels, she would be a bicycle.”

In the third season of the Netflix series Stranger Things, the year is 1985 and yes, New Coke reputedly has a starring role. Meanwhile, starting tomorrow, at 5 p.m. Coke will be selling a limited online edition of the original New Coke. (It left the supermarket in 2002.)

This ad gives you a bit of the flavor of its comeback:

Whether it’s 1985 or 2019, we are just seeing how oligopolies compete. Defined as very large firms that have considerable market power, one way that oligopolies boost sales is through product differentiation. During the 1980s, it was supposed to be a new taste. Now it’s a partnership with Netflix.

As you move to the right along this continuum of market structures, the firms get larger and more powerful:

My sources and more: The media has begun to publicize New Coke’s return, here and here. But Coca-Cola also does a good job of explaining what is going on. Please note that for the history of New Coke, I’ve quoted and paraphrased an excerpt from my book, Econ 101 1/2.