For Ben Bernanke’s 2014 going away party, the departing Fed Chairman’s staff honored him with ice cream, Crackerjacks, popcorn and a custom baseball card.  Like most baseball cards, it had his picture on the front and his stats on the other side: 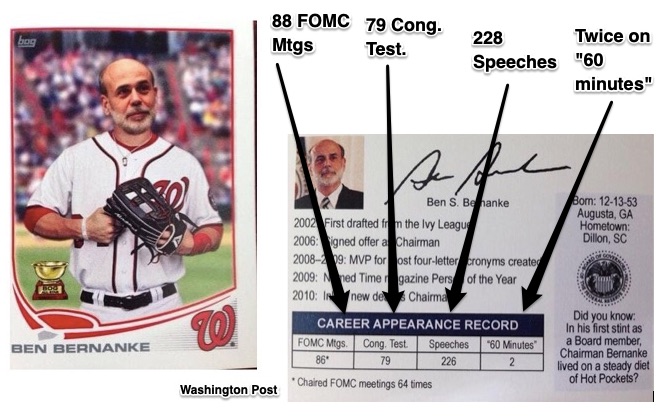 Not nearly as authentic looking, a Ben Bernanke trading card was listed on eBay for $1000.

And that is where we are going today…to the price of a baseball card.

To predict whether the price of a current player’s baseball card will go up or down, we can look at his performance.  A 2018 slump brought MLB’s 2017 Rookie of the Year, Cody Bellinger’s non-autographed card down to $2. Recently though after Bellinger’s 15 homers and a .400 batting average, that card has a $15 value.

You can see below how a player’s card value fluctuates:

In addition to performance, WSJ tells us that people hold on to the cards of “slumping sluggers” because they expect a recovery and sell when they believe a player has peaked. Also, injuries, a signature, and the number of outstanding cards can nudge price up or down.

Meanwhile, the market for vintage cards comes from eBay, auction houses, card shows, online, and privately. At the top is this 1909-11 T206 Honus Wagner card. Printed by the American Tobacco Company, it sold for a whopping $3.2 million in 2016: 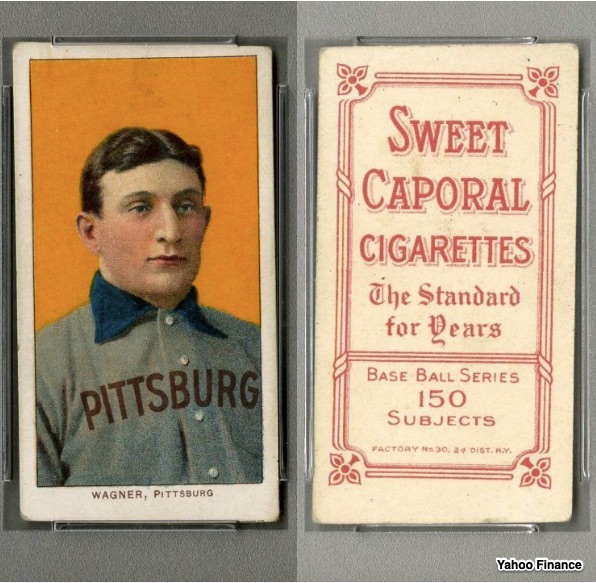 One determinant of an older card’s value is its PSA (Professional Sports Authenticator) 1-10 rating. A high PSA indicates the card is in good condition. At 5, the Wagner card’s PSA was considered high.

These are some other prices for older cards: 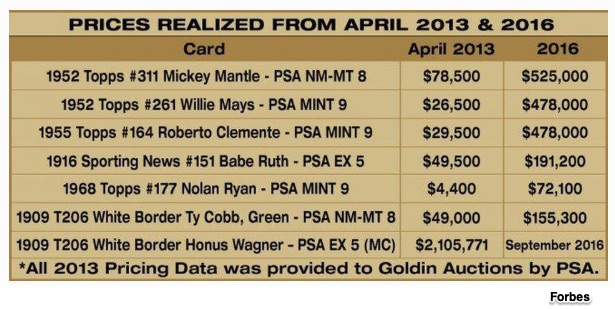 The people who publicize baseball cards influence their price. At an auction house, we have a mandated minimum that lets people know where the bidding will begin. In the booklets that tell the estimated prices of contemporary cards, they not only reflect previous transactions but also shape future sales.

A behavioral economist might call their numbers reference points. A reference point influences our opinion of a price. With gasoline, for example, a previous week’s price of $4.00 a gallon makes us feel that $3.50 is a bargain. But if the price beforehand had been $$3.00, then $3.50 looks astronomical. Similarly, the prices quoted for baseball cards before their sale can provide a reference point for the bidding.

For Mets first baseman Peter Alonso, the $300 estimate (above) from Beckett Media is a reference point.

My sources and more: Good occasionally for something beyond typical economics, WSJ had the baseball card discussion that grabbed me. Then, for the market’s details, possibilities include a supply side overview and how to grade a card. If you want to read more, this Yahoo Finance explanation of the Wagner card’s estimated value was quite interesting as was the article on the auction price. And finally, The Washington Post had Bernanke’s farewell.

Why We Want Women On Our Money