When I walk with my friend Eli and her dog Dosa, we take our plastic bags. Originally from ShopRite or the local farm stand, the bags were filled with groceries. Now, handy for dog poop, they reside in a bin under my sink until I grab one.

In more than 240 U.S. municipalities, California, and soon New York, those bags have disappeared. Because of bag bans or bag fees, many fewer people are re-using them.

And that could be the problem.

Through a DCB (disposable carryout bag) fee or a ban, we shop with many fewer lightweight plastic bags. Because paper bags and fabric totes replace them, our plastic waste plunges by millions of pounds.

But there is a problem.

Those paper bags and fabric bags have a substantial carbon footprint–more than what it took to make the DCBs. Just think of how a tree becomes paper. You are eliminating an environmentally benevolent plant, using toxic chemicals, and then doing some hefty processing and transporting. It gets even worse with a tote bag. To have a smaller global warming impact than a DCB,  your cotton bag has to be reused more than 131 times. Then, if those DCBs had become garbage hags at home, you have to use your tote as much as a whopping 393 times to offset a DCB’s global warming potential.

These are the amount of use numbers from a 2006 U.K. study that compared the global warming potential of DCBs (aka HDPEs) to reusable bags: 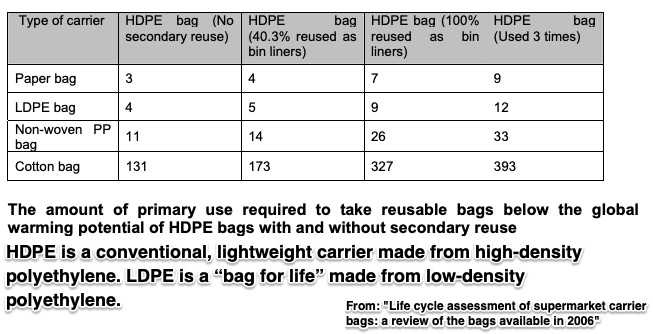 Furthermore, when there are no DCBs, we need more plastic garbage bags. Using data from California, one researcher reported a surge in demand for four gallon garbage bags while sales of other sizes also increased. The result was a massive consumption shift as we bought 11.5 million more pounds of garbage bags and used 40 million fewer pounds of DCBs.

You can see the pop in garbage bag sales just after the DCB ban: 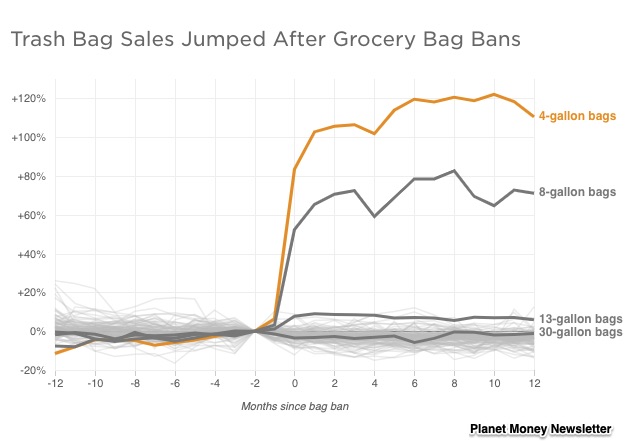 At this point you could be thinking there’s got to be more and there is. We just have to look beyond the carbon footprint from greenhouse gases. When we consider all of the waste generated by plastic, we could arrive at a new conclusion. As always in economics, we have tradeoff. A ban creates more emissions but less non-biodegradable litter.

So, if you care about non-biodegradable litter, then the DCB ban is for you.

A bag ban or fee could be called a Pigovian tax. Arthur Pigou developed the idea to cope with negative externalities. Defined as the harm done to an uninvolved third party when, for example, someone plays loud music in a dormitory or pollutes a stream, a negative externality needs an incentive to discourage its use. Dr. Pigou said the solution was a tax. When something becomes more expensive, people do less of it.

On a graph, the higher cost looks like this: 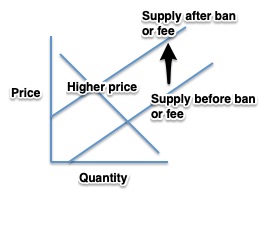 Bag bans and bag fees create a higher price.That price might not be in dollars but they do necessitate some costly inconvenience.

My sources and more: This Planet Money newsletter had all we need to know about the downside of the plastic bag ban. But for more detail, this paper and this U.K. study look more precisely at ban “leakage.” Lastly, the NY Times showed the regulatory side through New York’s new bag fee.

The Surprising "Green" Side of the SUV