A government shutdown is again in the news. The key date is December 21. If federal agencies without funding do not get their money by then, they have to follow their shutdown rules.

I suspect most of us will be affected. These are the facts:

Five agencies (blue) did get their Fiscal 2019 funding while seven (gray) did not. Those seven received a temporary reprieve from a CR (Continuing Resolution) that expires on December 21. If there is a shutdown, it’s the seven agencies that will be hit. And even then, not everything. It all depends on who is “essential.” 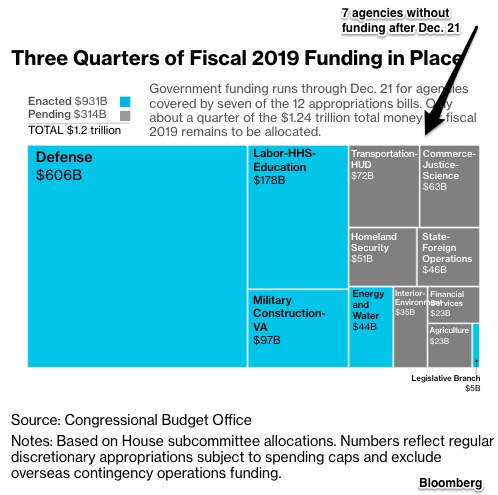 As for the numbers, we are talking about 750,000 government employees. Estimates indicate that 400,000 would work without pay and 350,000 would be furloughed. While the “essential” unpaid employees do get paid retroactively from new funding, those who are furloughed will not necessarily receive their back pay. But in the past, Congress voted to give them the money.

This potential partial shutdown sounds less catastrophic than the actual 16-day shutdown during October, 2013. At that time, suspended services included issuing new Medicare and Social Security cards. The EPA could not inspect 1200 different sites while the FDA postponed close to 900 inspections. The National Parks lost $500 million dollars in visitor fees and the Panda Cam went dark at the National Zoo. The IRS also had to turn away 1.2 million requests related to mortgage and loan approvals.

In the aggregate, economists believe shutdowns cost billions because of lost fees and pay to employees who were sent home. Then, to that government cost we can add the private sector where hotels near national monuments lose business, realtors have transactions cancelled, loggers cannot work in National Forests. Standard & Poor’s estimated a $24 billion hit to the 2013 GDP–a .6% slice of growth that was cut out.

Our Bottom Line: The Cost

The word “shutdown” obscures the massive impact. Summarized in one term, it sounds simple. But it is not.

I am reminded of what we have said before about the British seacoast. Quoting mathematician Benoit Mandelbrot, we pointed out that when you see the shoreline from afar, it looks like a smooth curving line. But look more closely at the coast–and at government shutdowns–and you recognize the details you need to know.

My sources and more: For the current shutdown basics, Bloomberg had a good article, the Committee for a Responsible Federal Budget had some history, and The Washington Post had some interesting detail. You might also want to read more about the three-day shutdown last January.