You might have paid more for your popcorn than your movie theater ticket.

The reason is probably not what you expect.

The first movie theaters avoided popcorn. They believed the crunch would be a distraction and somewhat demeaning. However, by the late 1920s, talkies had arrived and so too had the general public.

Moving onward to the 1930s, a Great Depression, and the quest for cheap entertainment, popcorn became the perfect snack. At first vendors sold it outside. Then, paying a concession fee, they moved inside. And yes, as you might guess, soon the theater owners started selling it themselves.

Fast forwarding to today, the typical medium bucket of popcorn is sold for $7.99 at the movies. You could buy the same quantity of some similar popcorn for $1.69 or so at your local market. Comparing the price to the cost, the movie theater has a markup that is close to 800%.

While popcorn has the highest markups, it is not that different from other movie theater food: 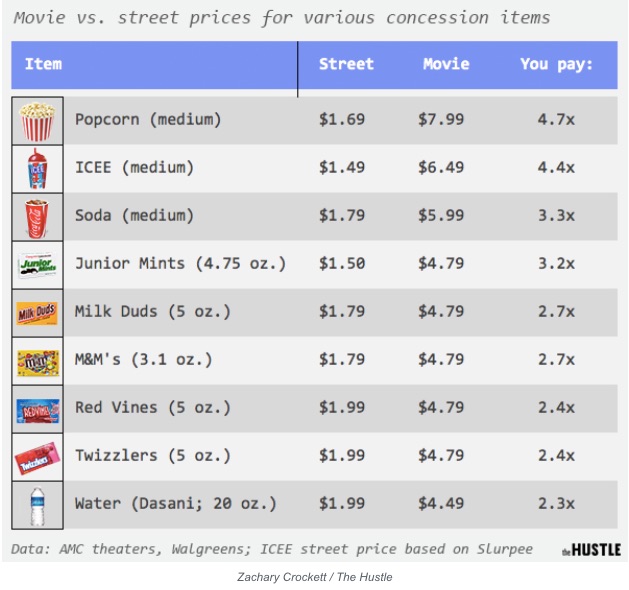 The movie theater gets most of its revenue from ticket and food sales. However, somewhere between 60% and 70% (and sometimes more for a huge hit) of the ticket revenue goes to the movie distributor. Consequently, from a $9 ticket, the theater keeps just $2 to almost $4. And not everyone pays the same ticket price. If you are very young or very old, you pay less.

The Hustle did a good job of describing movie theater revenue. After looking at two movie chain annual reports, they concluded that concessions represented approximately 30% of all revenue but were almost half of gross profit. In 2018, one movie chain, Cinemark, collected $1.8 billion in ticket revenue but had to pay back $1 billion in fees. Meanwhile, its $1.1 billion concession revenue only cost them $181 million which meant something close to a whopping 84% profit margin.

Prices that target different customers take us to what economists call price discrimination. Not necessarily a negative term, price discrimination just means that the business is charging a variety of prices because it has some price setting monopoly power. The trick is to use 2 or more prices. The higher price attracts customers willing to pay more. The lower one grabs others who refuse to pay extra

Airlines do not ask if you are a business traveler who is happy to pay a higher price. Instead, they find out by giving a lower fare only to fliers who remain through Saturday night. Similarly, movie theaters hope to encourage the dollar poor/time rich elderly to go to the movies by charging them less but ask the rest of us to pay more.

This is where the popcorn enters the picture. Pricey popcorn makes those lower ticket prices possible, And that is why you should buy popcorn at the movies.

My sources and more: Thanks to Marginal Revolution for alerting me to the Hustle’s look at movie concession food prices. From there, I was curious about popcorn history. Meanwhile Why Popcorn Costs So Much At The Movies had the economic analysis and HowStuffWorks explained box office revenue.

Please note that parts of “Our Bottom Line” were in a previous econlife and our featured image is from Pixabay.

When To Speed Up Tennis