When To Speed Up Tennis

Tennis has its fast and slow players.

U.S. Open champion Rafael Nadal is among the slowest because, as he explains, he uses time to let him focus. Before serving he cleans the baseline with a rub from his shoes and taps his sneakers to remove the soil. He rejects balls, does his wedgie routine (which when asked he said, “I cannot change…”), dries his face, and rubs his hand on his shirt and each ear. Then, rocking back and forth, he might conclude his pre-service rituals. It all could take 20 seconds–as long as sprinter Usain Bolt needs to run 200 meters.

These numbers indicate the average time that Nadal and other players add per point: 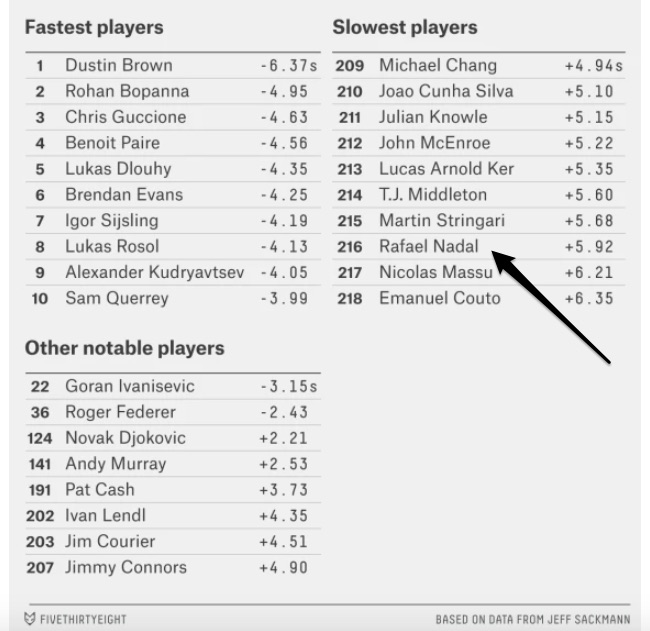 During a 2015 Nadal match, an average point took 47 seconds. Much less, the average was 36 seconds when a speedy Roger Federer played Gael Monfils. The difference counts when you think about match time. The Nadal match lasted 41 more minutes.

For the fans and the players, the length of the match matters.

Speeding Up the Game

Before this year’s U.S. Open, we found out that they would use the serve clock to shorten match time. This was their tweet: 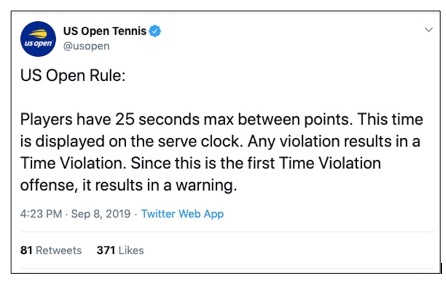 And this is the serve clock: 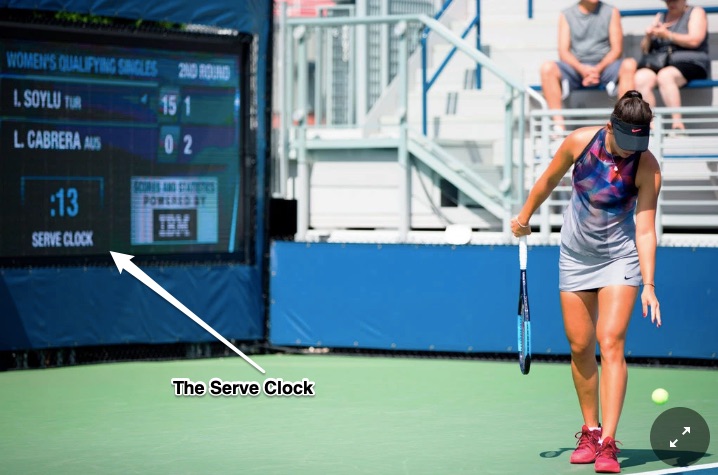 During the U.S. Open championship match, Nadal first got a warning for violating the 25-second rule. Then later near the end, he again broke the rule, lost a first serve as a penalty, faulted, and lost the game. But still, in a tense 4 hour and 50 minute match, Nadal won his 19th Grand Slam title.

Defined as the impact on an uninvolved third party, an externality can be a plus or a minus. It can be positive or negative. A vaccine is the perfect example of a positive externality. When someone gets a flu shot, the transaction is between patient and doctor. But many of us benefit because that individual does not get sick. On the negative side, we could cite the loud music in a dormitory that stops a faraway student from studying. The music is the negative externality that leads to a low grade for an unknown individual.

Somewhat similarly, Rafael Nadal’s pre-serve routine lengthens a tennis match. His behavior targets himself and his opponent. However, the extra time becomes a negative externality that tennis officials fear will diminish the popularity of their sport. They worry that excessively long matches will bore fans.

My sources and more: Fivethirtyeight had the most interesting look at each tennis player’s pace. Never realizing it was an issue, from there I discovered this NY Times article and a discussion here also. As for Nadal, this interview was on his wedgie habit and here, for his other rituals. Then, if you want to read even more, do look at what The Economist had to say. And finally, I send many thanks to my student Maeve for providing many of the basic facts I needed for this post.