Economic research tells us that default options are powerful. Because they ask us to do nothing, we tend to select them. So, if the default retirement plan encourages the most saving, many of us wind up putting more aside. Or, if we are defaulted into a high co-pay health insurance plan, we take it.

But really, it is more complicated.

Where are we going? To a closer look at deceased organ donations.

People will automatically donate their organs when they die unless they actively “opt-out.” Reading Richard Thaler, most of us would say the nudge should work. And yes, when the law went into effect on January 1, 2017, only 150,000 out of a possible 66 million had signed the “refusal register.”

Similarly, with opt-in as the default, Spain has led the world with a 35.7 out of 1 million donation rate. But here is where it gets tricky. Looking further, you would discover that Portugal and Belgium’s donation rates are similar to the U.S. And yet, the former two countries have the “opt-in” default. Furthermore, when Australia (+41%) and the U.K. (+36%) successfully upped their 2009 deceased organ donation rates by 2014, they did not change their consent systems: 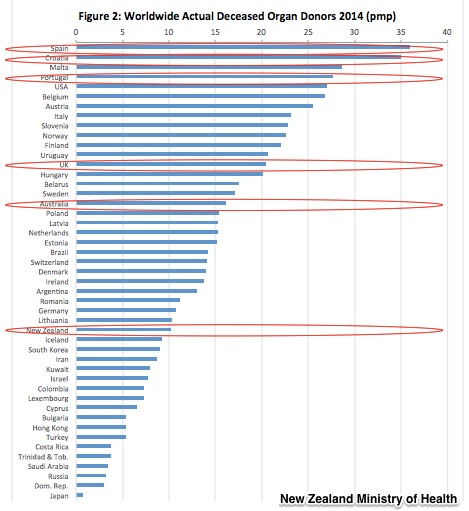 From a study on how to boost New Zealand’s deceased donor organ rate, I saw some of the behind-the-scenes issues. My takeaway was that increasing deceased organ donations has to involve institutional spillover.

Looking at Spain, Portugal, and Croatia, the New Zealand study said you need the following. (Some I directly quoted while others I summarized):

Where does this leave us? Sometimes a nudge is not enough.

My sources and more: For nudges generally, Richard Thaler (2017 economics Nobel laureate) talks about them in a Yale Insights article. More specifically, for organ donation, you might enjoy this NY Magazine article. But for the story behind the nudge, this New Zealand report from its Health Ministry has the best information.

How to Plant Marijuana Markets