For China, becoming a middle income country is about more than per capita income. It is also about cranberries.

In 2013, most Chinese consumers had not heard of the cranberry and, until recently, they even had no word for it. However, last year, the recognition number was up to 54% and a 48-ounce bag of dried cranberries ($11/RMB75) was a popular online purchase.

In a report on the Chinese consumer, Goldman Sachs called “eating better” a top spending category:

So, it makes sense that more affluent Chinese consumers are snacking on dried cranberries at work, eating cranberry pastries, and tossing them in smoothies. As an antioxidant, cranberries are good for us. Coming from the U.S., they have an aspirational aura. And in China, red is associated with good fortune.

One source of their cranberries is the United States:

Meanwhile, cranberry demand is coming from an expanding segment of the Chinese population… 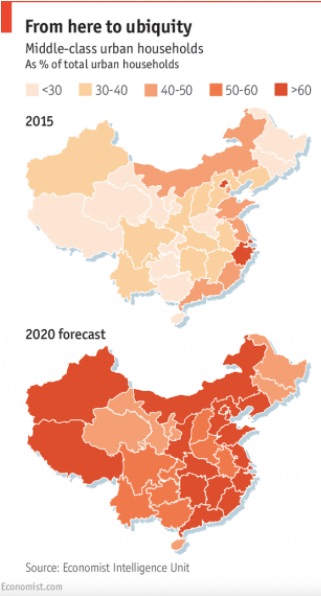 …that is living longer and eating more meat: 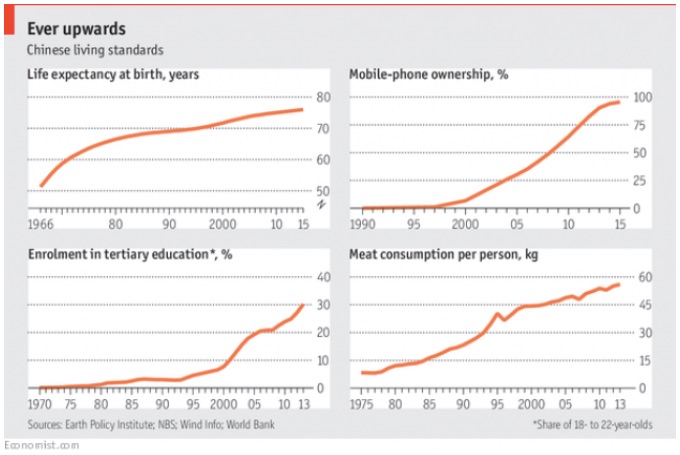 For a developing economy, becoming more affluent first means more meat and then maybe a washing machine. Described through a development ladder, at each rung, spending surges and then flattens at that higher level when consumers can afford to climb to the next step.

The World Bank says China’s per capita income for 2016 was $8,260.00. Below, that places them at the commodities level of development. Perhaps just below washing machines, we can add cranberries:

My sources and more: Ideal complements, this WSJ article on cranberries provides the specific example while The Economist here and here conveys the overview. But, if you want still more on China’s new love for the cranberry, do look at the USDA and China Daily.

Please note that in previous econlife posts we published the development ladder and its description. Also, this post was edited after publication.