How to Plant Marijuana Markets

The issues are surprisingly similar for a tiny island like Nantucket and a huge state like California. Both are figuring out how to create the marijuana markets that they legalized.

Last November, Massachusetts and California voted to legalize recreational marijuana within their borders. Doing so, they violated the federal law that says marijuana is a Schedule 1 controlled substance. As an island in Massachusetts, Nantucket will have to cope with the federal state conflict.

Nantucket could have a tough time “importing” and “exporting” marijuana. Since the federal government regulates the air and water between Nantucket and the Massachusetts mainland, it can say no to transporting a controlled substance like marijuana. But Nantucket needs the mainland connection for the state labs that will test any locally grown marijuana. They also will want a cheaper source of supply than the island could provide.

Meanwhile, at a recent town meeting, residents focused on a list of concerns. Yes, 63% voted for legalization but still there was considerable debate. They had to decide whether retail pot shops should be permitted along the town’s Main Street. Also people were concerned with auto safety, protecting schools and daycare centers, and taxation.

The California debate was similar. They are retaining a state license system while municipalities add lots of local rules. Some are enthusiastic while others have even banned marijuana. And like Nantucket, their discussions ranged from protecting consumers to regulating a supply chain that includes the field, distribution centers, testing labs, and retail shops. With taxes, it’s Goldilocks: not too high and not too low but just right.

Our Bottom Line: The Circular Flow

As economists we can say that the marijuana narrative is about a new market. It is about a process through which price and quantity can be determined. To depict a market, economists draw a circular flow model. In the outer loop, dollars are circulating between households and businesses. Then, the inner loop just shows that those dollars pay for goods and services, and land, labor and capital. 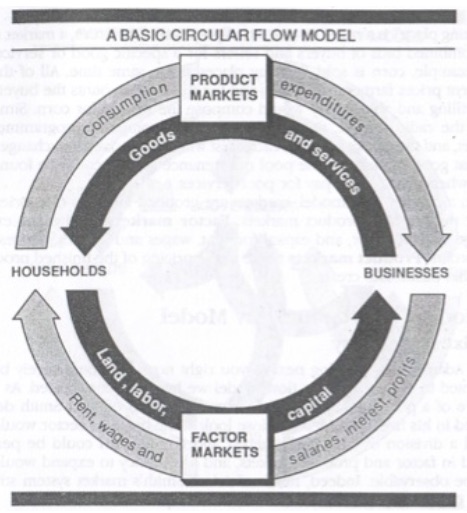 Returning to Nantucket, we could agree with Adam Smith and suggest that the federal government leave the market alone.

My sources and more: As U.S. states prepare for legalization, articles have proliferated. The NY Times has looked at California’s disarray while elsewhere there is considerable detail about Massachusetts legalization and Nantucket’s plight.  Also you might want to hear more about this Nantucket town meeting and how Alaskans solve the state federal conflict. Finally, in this paper, the federal government describes marijuana’s status.

Why We Will or Won't Stand in Line