The Reason NBC Can Charge $4.5 Million for a Super Bowl Ad

Because it takes time to convey a message, Super Bowl ads are getting longer.

You can see below how, year by year, length has extended. 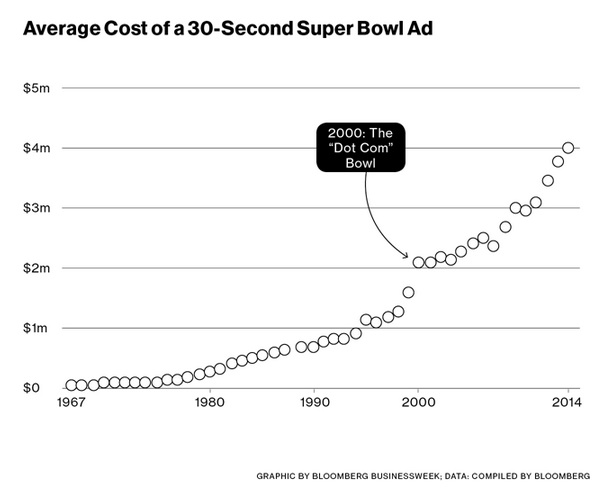 To judge just how exorbitant $4.5 million is for 30 seconds, we can compare Super Bowl rates to prime time TV. And they actually are similar. If we look at eyeballs, the numbers are comparable . At $35 per viewer, Super Bowls ads are reasonably priced because of their 111 million audience.

So, the Super Bowl attracts more viewers, some of whom (like me) are more interested in the ads than the game and businesses perceive the Super Bowl as a unique opportunity to build brand awareness, increase sales and buoy their stock price. In addition, a University of Wisconsin study actually concluded that from the Monday before the Super Bowl to the Friday after, the stock price of firms with Super Bowl ads outperformed the S&P by 1%.

Saying its Super Bowl TV ad inventory for the game is sold out at approximately 70 units, NBC can behave like a monopoly, become a “price maker,” and implement monopoly pricing. But still, as with all monopolies’ demand curves, there is some price elasticity. GoDaddy and Coca-Cola are each running one ad instead of two.

What Greek Markets are Saying to Us