What Greek Markets are Saying to Us

In 1906, at the West of England Fat Stock and Poultry Exhibition, a rather large ox was on display. Like guessing how many jelly beans are in a jar, people could win prizes for accurately estimating its weight. At the time, one individual who was curious about crowd accuracy noted the guesses on the 787 legible entries and computed their average. Remarkably, the crowd average was 1197 (others say 1208) and the ox weighed 1198 pounds.

Writers like to use the ox story as an example of collective intelligence. In The Wisdom of Crowds, financial writer James Surowiecki says we can use collective intelligence to solve cognition problems. The crowd can tell us who it thinks will win the Super Bowl, the location of a lost submarine or whether a country will pay back its debt..

And that takes us to Greece.

After last Sunday’s election, people are wondering whether Greece is heading toward a bond default and eurozone exit. Using the “wisdom of the crowd,” one Bloomberg writer suggested that Greek bond prices, credit default swaps and Greek bank deposits could be our crystal ball.

So let’s take a look…

When yield soars, it means the collective intelligence is saying Greek bonds are risky:

Confirming the message from bond markets, the price of insuring five year bonds is going up. Bloomberg says credit default swaps prices indicate there is a 70 percent chance that Greece will default within five years.

You can see below where the CDS price for those five year bonds was going in December. The current cost is $4.2 million plus $100,000 annually to insure $10 million of Greek debt that is due in five years. 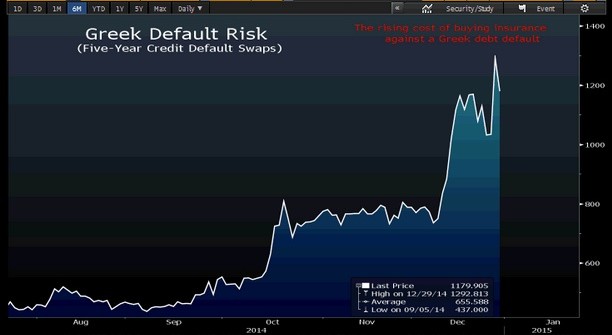 And finally, deposits have been fleeing Greek banks at record levels.

Below, the arrows indicate how much deposit totals decreased from a peak just before 2010 to the end of December 2014. As of yesterday, outflows have accelerated to record levels.

Perhaps the Greeks always knew the crisis was not over.

Former Secretary of the Treasury Lawrence Summers said that the most important idea to learn about economics is “the power of the market.” As a process that creates prices and quantities for countless items ranging from securities to services, markets are a source of information and incentives.

How To Keep Your Parking Spot After a Snow Storm

The Reason NBC Can Charge $4.5 Million for a Super Bowl Ad