In Capitalism, Alone, a former lead economist at the World Bank compares U.S. and Chinese capitalism. To begin, he tells us that capitalism is a decentralized economic system in which privately owned profit seeking enterprises employ free wage labor. While the United States has a liberal meritocratic version, in China we can call it political capitalism.

The system is run by a “savvy” bureaucracy that needs to implement policies that guarantee economic growth. Growth is especially important because the rule of law is not. Only by maintaining a dynamic private sector can they legitimize the arbitrary character of the law.

2. But then, China winds up with contradictions:

Dynamism requires a highly skilled elite that will function optimally through a consistent rule of law. However, political capitalism depends on a bureaucracy with the power to ignore the rule of law and make arbitrary decisions. The result is corruption that diminishes the power of the people that grow the economy.

You can see that except for Singapore, countries with political capitalism have considerable corruption: 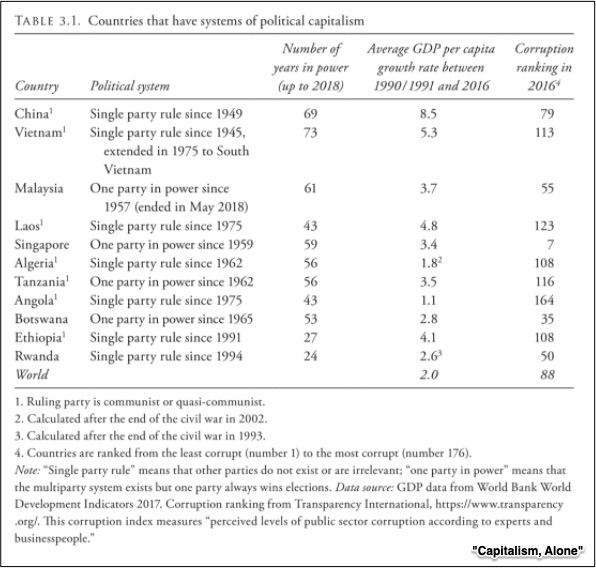 3. The market has increasingly set prices:

Before 1978, the Chinese government set prices for most industrial goods, agricultural commodities, and retail items. But then, by the mid-1990s, the market was pricing 81 percent of manufactured materials, 79 percent from the farm, and 93 percent of retail. Today, the trend has continued.

4. Since 1978, business ownership has shifted from the state to private enterprise:

Before 1978, State Owned Enterprises (SOEs) produced close to all industrial output. Now, their share has dropped to approximately 20 percent. Correspondingly, China has a growing “capitalist class.” By 2013, professionals and individual business owners composed an increasingly larger proportion of the top 5% instead of workers, government officials, and clerical staff. I added the pink arrows to show their decreasing size: 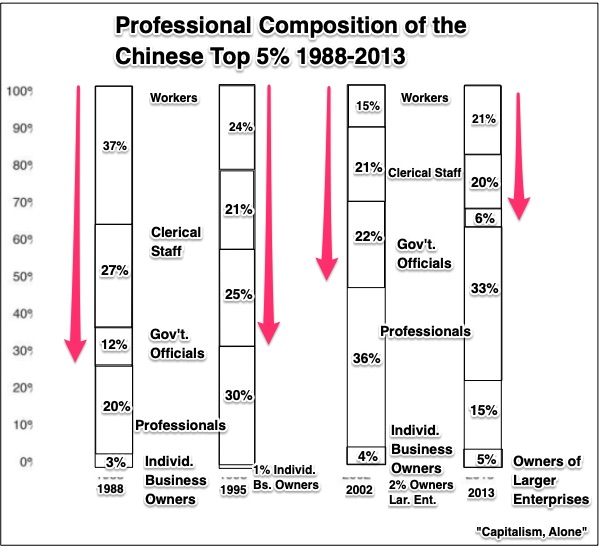 5. We can summarize by comparing China’s political capitalism to a bird in a cage:

Economists like to tell us that there are three basic ways in which we produce and distribute our goods and services. A traditional approach says that the past determines the future. The children in a family will select their parents’ roles and occupations. A second possibility is command. Then, central planning from one person or group determines how we answer the basic economic questions: “what, how, and to whom.” The third possibility is a market. Coming from the bottom up. each of us decides what we want and need, and businesses respond.

With decisions coming from millions of consumers and businesses, the market is bottom-up. Meanwhile, command is top down. While Branco Milanovic says that China has political capitalism, I would add that there is a healthy dose of command. And that returns us to the “bird in a cage” metaphor. Their economy still mandates the cage.

My sources and more: My main focus today, Capitalism, Alone is worth a look. I do also want to note that I certainly believe Dr. Milanovic has cited accurate trends. However, I have always been somewhat skeptical of China’s statistics.

Where a Universal Basic Income Was Successful