Our story starts in 1978 when you would have paid 63 cents for a gallon of gasoline. At $1.19 only two years later, in 1980 the price had almost doubled. To make a long story very short, during those years there was a revolution in Iran and OPEC (the Organization of Petroleum Exporting Countries) began to exert power over the supply of oil. 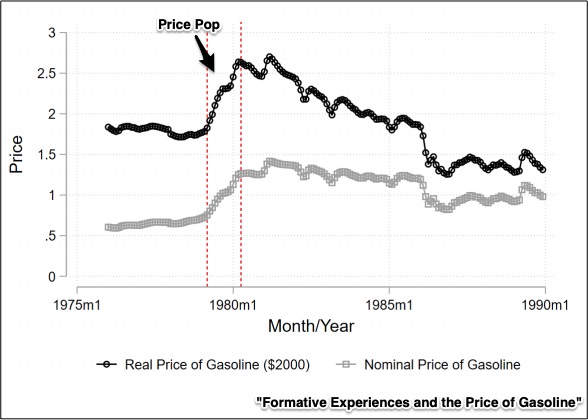 But there was another result that became evident 20 years later. At 36 years old, the teenagers who had gotten their driver’s licenses in 1980–just when gas prices were skyrocketing–could demonstrate different driving preferences from their predecessors. They were less likely to drive to work, they were more likely to take mass transit, and, if they owned a car, they accumulated fewer driving miles during their lives. In addition, they could have been less likely to buy gas guzzling vehicles.

According to a recent paper, we could be looking at the impact of path dependence. To understand what behavioral economists mean by path dependence, just remember two words.

History mattered in 1980 because it shaped the driving behavior of some of the teenagers who got their licenses then. I also like to think of 1980 as their reference point. Because they started their connection with the auto when prices were high and lines were long at gasoline stations, they associated a high cost with driving. That connection stuck with some of them–especially lower income individuals and people with mass transit access.

Similarly, economists have hypothesized that other birth cohorts have responded to gas prices as teenagers. They also suggest that the December 2007 to June 2009 recession created subsequent attitudes about spending for certain millennials. And they look back to the 1930s to prove the path dependence of that era’s teenagers through their adult frugality.

So where are we? Even when minor, our teenage economic experiences can have a major influence on our adult behavior.

My sources and more: Thanks to Marginal Revolution for alerting me to the Washington Post article on birth date and behavior. From there, there were links to the original paper and to a related one, here. It was also handy to have some government gas price data.

Why We Want the McRib

How Laissez-Faire Countries Tax and Spend