How Laissez-Faire Countries Tax and Spend

What we tax and how we spend send a message. So today, let’s look at what countries with more economic freedom tell us through their fiscal policy.

I’ve selected laissez-faire countries from the list created by the Index of Economic Freedom. As they define it, economic freedom is the “right…to control his or her labor and property…to work, produce, and invest in any way they please…” To rank countries, they’ve selected four broad categories that involve the rule of law, government size, regulatory efficiency, and open markets.

Then, the Index ranks countries on the basis of 12 components that they quantify and average to arrive at a 0-100 score for each of 180 countries. These are the six that they call the freest economies:

Because I also used OECD (Organization for Economic Cooperation and Development)  country data for taxing and spending, I had to exclude Hong Kong and Singapore. As a result, I decided to add the United Kingdom and Canada:

And then I also took a look at the United States and France. The U.S. was in their Mostly Free group while France was called Moderately Free:

A signal of how much the economy involves government. our first stop is tax-to-GDP-ratios. You can see below that most of the Free and Mostly Free countries, in 2017, were close to the OECD average for tax revenue as a percent of the GDP. Only Switzerland was appreciably lower and France was much higher. You can also see that Australia, New Zealand, and the U.S. stand out for the proportion of their tax revenue that comes from the individual income tax: 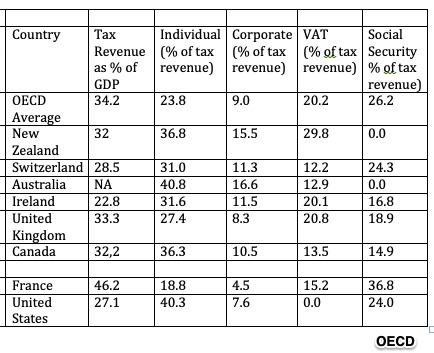 Next, I returned to the Index of Economic Freedom for a summary look at the laissez-faire countries’ spending and taxing. The numbers in the table below display each country’s rank for that component on the Index’s 0-100 scale. I was surprised that none has very a high score in either category. And, at 3.9, France was astoundingly low: 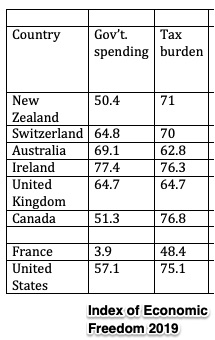 Our Bottom Line: Taxing and Spending

When we shine a spotlight on taxing and spending, we are looking at fiscal policy. You can see that the tax side of U.S. fiscal policy exceeds some of the laissez-faire nations. But our spending does not.

Returning to where we began, what is the message that the fiscal policies of laissez-faire countries are sending? I suspect we can conclude that their laissez-faire scores come from other categories.

My sources and more: Since we haven’t looked at laissez-faire countries for awhile, it was time to return. For starters, the Tax Foundation and the OECD are handy first stops. From there, I checked the Index of Economic Freedom.and the World Bank’s Ease of Doing Business Index. All convey some surprises. Do take  look.

Why We Waste Healthcare Spending