How Women and Men Respond Differently to Gender Branding

There actually once was a Chick Beer. it was lightly carbonated, “for less of that bloaty feeling,” while its 3.5 carbs were “about the same as a half a carrot.”

Do note that the six-pack looked like a purse and the bottle appeared to combine a little black dress with a lot of pink: 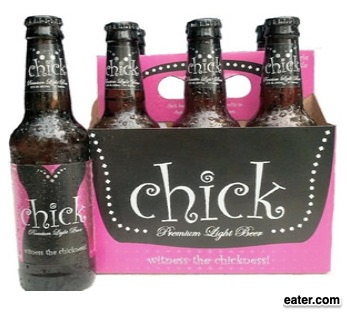 Chick Beer had a short life. So too have other brands that target women.

BIC “for Her” is still here but the reviews…you judge them: The top positive review (5 stars) said, “…It has given me soft skin and manageable hair and…self-esteem..”  On the negative side (3.3 stars), “I’d really like to buy a pack of these pens; but I probably need my father’s or husband’s permission first…” Somewhat similarly, Target was criticized for a building set girls’ aisle and boys’ aisle. And Pepsi never even sold the lady-friendly chips that were “low crunch.”

In a recent paper, researchers observed women’s reactions to gender branding. They compared the response to a low value Hillary Clinton sticker and a higher value button. Asked which they preferred, college students chose the sticker that did not refer to women:

Similarly, when women were asked to choose between a green and purple calculator, the purple one was more popular until it had the “For Women” label : 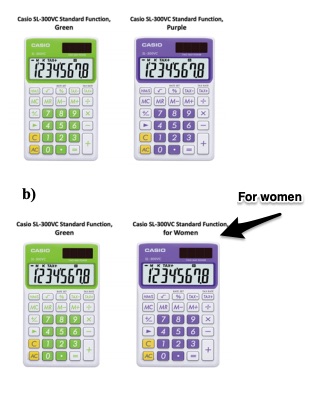 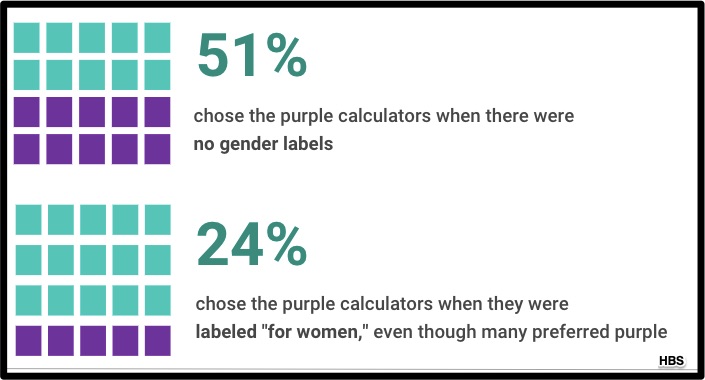 Meanwhile, the men in the calculator experiment were “more likely” to select the purple calculator when it had the male label. (47.3% v. 31.9%)

Researchers hypothesize that women reject gender branding because of its connection to a negative stereotype. Men though perceive nothing negative. As a result, female gender branding has a greater chance of backfiring.

As economists, we could also say a successful brand shifts our demand curve to the right. The utility it creates can give us more satisfaction and more pleasure. It can make us believe that the good or service is more useful, healthier, or stylish. The brand increases our demand.

The goal is to promote the loyalty that generates inelastic demand. Defined as a relatively minor response to a price change, inelasticity means that purchases slip only slightly even when price substantially goes up. With the brands we love, we are happy to pay more.

Below, a somewhat inelastic (more vertical) demand curve shifts to the right because of the extra utility from a compelling brand: 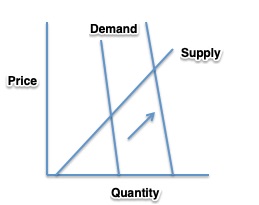 However, like Chick Beer, targeting women with a brand won’t work.

My sources and more: This HBS article did a good job of summarizing gender branding research. But, if you want more then do look at this paper and at Eater for details about Chick Beer.

Please note that parts of “Our Bottom Line” were published in a past econlife post.

After publication, I inserted a minor grammar edit.

October 2019 Friday's e-links: From the Proclivities of Monkeys to Trade Disputes and a Small Town in Alaska