Starting today, we can buy a Ghost Whopper. But it’s only at 10 locations.

The limited availability has an economic explanation.

Burger King likes to create special Halloween burgers. Last year they said their “Nightmare King” was clinically proven to cause nightmares. If you ate one just before bedtime, sleep lab tests indicated your chance of a nightmare increased by 3.5 times. (I’m not sure if it was the glazed green sesame bun or the combination of chicken, ground beef, onions, mayo, American Cheese and bacon.)

This year they hired a master medium to see what dead people say about a Ghost Whopper. Except for a bun made with white cheddar, it’s the normal Whopper. As you can see in the ad (below), when the trance-channeler (the medium) ate the Whopper, the spirits that inhabited his body took a taste. Most seemed to like it. One even (reputedly) said, “It’s beyond belief to experience this taste.”

The Whopper is rather elderly. Having been around for 62 years, it needs to appear younger. So, in a temporary reincarnation as one of Burger King’s Halloween burgers, the Whopper gets an up-to-date identity.

An economist might say the Whopper needs constantly to change our demand every time its utility drops. Surely hoping to increase sales, their new Whoppers have included Halloween Whoppers, Upside Down Whoppers, and  Impossible Whoppers. We even bought more traditional Whoppers when Burger King rolled out the Impossible (faux meat) Whopper.

The following graph displays changes in demand for specialty Whoppers. You can see that the new equilibrium, where supply crosses the second demand curve, is at a higher quantity: 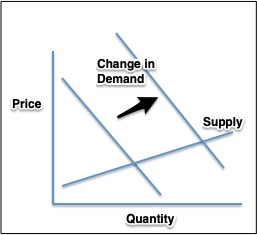 If you want a Ghost Whopper, this QSR article lists the ten places that are selling it.

My sources and more: The Ghost Whopper was news at Eater  and The Drum. Meanwhile, USA Today told all about the “Nightmare King” and BusinessInsider detailed the Impossible Whopper.

Why the World Economy is Growing More Slowly

How Women and Men Respond Differently to Gender Branding