Some Israeli investors seemed to have confirmed his hypothesis.

Does Investing Change Your Politics?

Focusing on the March 2015 Israeli elections, researchers from Stanford and Hebrew University told a group of survey participants that they were providing investor attitude information. In the study, some individuals received stock or the right to buy it while a control group did not.

The real goal of the experiment was to see how becoming an investor affected your political inclinations. Did your right or left wing tendencies change when you owned or had the opportunity to own securities? Were you more willing to support a concessionary peace process with the Palestinians?

The answer is yes.

In the study, the investors tended to become more left wing. The equal balance between hawks and doves in the initial survey shifted toward the doves in the after version. The investors displayed more of a statistically significant vote for the leftist Zionist Union than they had previously demonstrated.

The authors of the study then asked why. They knew that investors recognized that equities markets rise when peace negotiations are hopeful and fall when they disintegrate. However, they wondered if the reason their voting changed was the money they could lose or some new understanding of the world.

Because participants were given only $50 to $100 to invest or vouchers, they concluded the small gains would have little influence. Furthermore, the study’s investors retained their newfound convictions after selling their stock. As a result, they believed that investors are more likely to have an understanding of the world that favors peace.

As economists, we can say that financial markets create political externalities. They have an impact on uninvolved third parties. According to a Rand analysis of the Israeli Palestinian conflict, one externality is the goods and services production represented by the GDP.

Below you can see five possible conflict resolution scenarios and their potential per capita GDP impact: 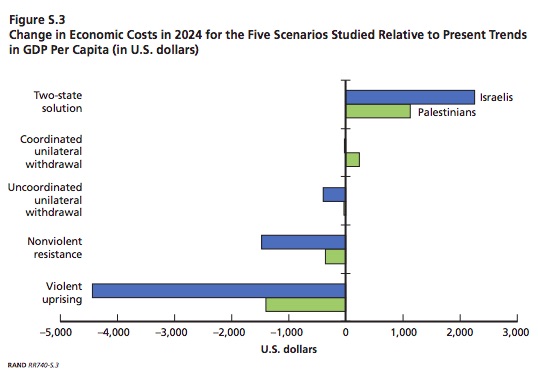 My sources and more: Thanks to Marginal Revolution for alerting me to how investing could relate to politics. That took me to the press release from Stanford and the paper on which it was based. From there, it made sense to take a look at a Rand study on the economic impact that peace would have in Israel. I recommend all. The topic is fascinating.

Our featured image is from Reuters/Baz Ratner.

The 5 Stars That People Get (And Don't Deserve)