The 5 Stars That People Get (And Don’t Deserve)

Although riders rate Uber drivers on a one to five scale, less than a 4.6 could have dire consequences. So, one driver created a T-shirt that says: “If you’re alive when you arrive, that’s a FIVE!”

Another posted this guide:

★★★★★ = The ride was good, great, legendary, mediocre, average, decent, okay, maybe he missed a social cue or made a bad joke, but at least he got me where I needed to go, of course he can improve!

★★★★ = This driver sucks, fire him slowly; it does not mean “average” or “above average”. Too many of these and I may end up homeless.

Where are we going? To a new kind of inflation.

On its website Uber says drivers can expect riders to evaluate them on cleanliness, communication, and navigation. Uber than adds up the numbers and divides by the number of evaluations to get a “driver-partner” rating. Rather than identify a specific number, they say that an account could be “de-activated” if a driver’s ratings drop below the average in the area. Last July, the average for Atlanta, Georgia was 4.8.

According to a new paper from NYU, we know that 11 years ago, employers (riders) in a typical peer-to-peer firm gave an average 3.45 rating for a worker (driver). By 2015, it had risen to five.

Then, using data from that unnamed firm, researchers looked more closely at how our scores have increased. In a 2008 comment, a passenger who said “good job” gave close to 4.6 stars. In 2015, the same comment became almost a 5. Even with a “terrible,” in 2016, the star count was nearly 2.5: 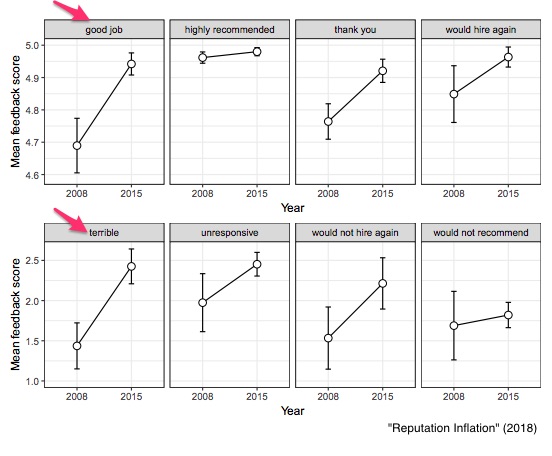 With ratings rising, we wind up with two questions:

One last twist to this whole story involves privacy. When the information remained private, people seemed more comfortable giving lower scores. On the following graph  based on the NYU study, you can see the difference between the public and private scores:

As economists, we can say that the increase to the five rating was inflationary.

With prices, inflation can be caused by too many dollars trying to pay for too few goods and services. The result is a higher price for the same item. If prices rise considerably, they no longer signal the value of a product. The perfect example is Venezuela’s current hyperinflation. Knowing you need a wheelbarrow of money to pay for a dozen eggs says nothing about the value of eggs you are buying.

Similarly, when an Uber driver gets a five, we know nothing about the value of the drive that was provided. Being told that close to 90% of Chicago’s UberX drivers had a 5-star rating average during the beginning of 2017 tells us nothing about their quality.

My sources and more: Thanks to Quartz for reminding me it was time to return to ratings inflation and this Quartz for the driver signs. But for the real analysis I suggest this study from NYU’s Stern School of Business. And, you might also enjoy taking a look here at how we described Venezuela’s hyperinflation.