Years ago we were concerned with too many babies. Now we can worry about too few.

The problem is the looming demographic imbalance. As we live longer and have fewer babies, a nonworking older segment of the population becomes disproportionally dominant. And with their numbers come their needs. Health care. Pensions. Housing. Income.

One solution is higher fertility rates. In South Korea, the government is considering a new kind of entitlement. Create marriage incentives through loans that cover the expense of the wedding process. Then (hopefully) more young couples will have babies who grow up, enter the labor force, and eventually outnumber the elderly.

For today, let’s just compare populations to see who will have the biggest demographic imbalance. Tomorrow, in Part II we look at where the baby solution could work.

In each of the graphics, the light purple sections display what the young and old non-productive population consumes while the darker mid-segment is the income that labor produces for everyone. You can see that Japan has the biggest problem with an aging population consuming increasingly more as its labor income shrinks. Meanwhile, even by 2100, Nigeria has relatvely few old people to support. 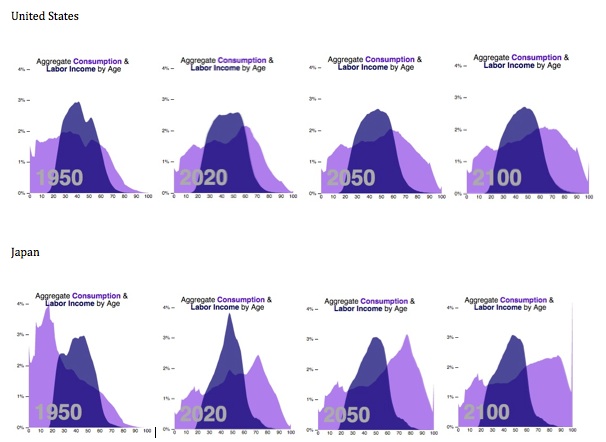 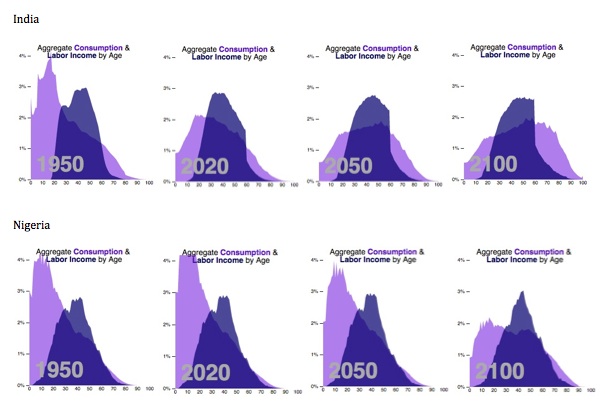 Viewed as a ratio, we have labor income over consumption. So, as consumption gets bigger, the fraction, i.e. the ratio, gets smaller.

With expanding elderly populations and a moderate fertility rate, developed countries like the United States will have redistribution decisions. In the public sector, we are talking about shifting labor income into the tax dollars that fund entitlements and pensions and education.  Meanwhile, in the private sector, more informally, families will be making similar decisions about the time, money and energy they shift to the old and the young.

Drones and Property Rights In the Air

Part 2: What To Do When More People Are Old