Part 2: What To Do When More People Are Old

Russia’s Mayor of Ulyanovsk thought he could boost Russia’s low birth rate by giving a half-day off on September 12. On this “Conception Day,” the women who signed up were supposed to get pregnant. To win money, a car and other big prizes, and to have the National Anthem playing during the delivery, they had to give birth precisely nine months later on National Day. The idea worked. On June 12, 2007, three times the region’s average number of babies were born.

Where are we going? To babies and the elderly population.

As we looked at yesterday, an aging population creates problems about support. Today we ask whether the right birth rate is the solution. Sort of like Goldilocks, countries have to avoid too many babies and too few, and figure out what is “just right.”

What is Just Right?

From a statistical perspective, “just right” is the 2.1 births per woman that maintain a population. Here we find a divide between more and less affluent countries. For 2005-2010, the high income country average was 1.65 births per woman (U.S., 2.06 and Japan, 1.34) while lower income nations averaged 4.03.

Looking through a budgetary lens, to identify “just right,” we can focus on the expense of the elderly. You can see below that by 2050, the projected median age in Japan and South Korea is 53, in Germany, 51 and Spain, 50.  These more affluent countries will need tax payer money for the government programs that sustain older people. 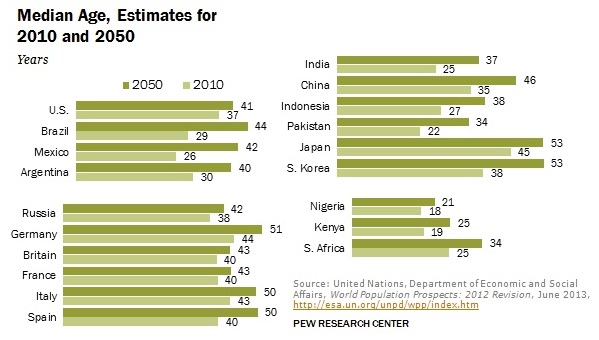 Thinking of the above median projected ages, you can see why, below, certain nations need more youth to enter the labor force and support the elderly through their taxes while others do not. The U.S., for example, with a replacement rate close to 2.1 might be near a sweet spot. European nations in red, like Germany, have a fiscal rationale for increasing their birth rate.

Looking at the impact of a higher birth rate on a country’s standard of living can change our answer to “just right.” Here we have to consider the cost of children. The public cost of education and the private cost from family time, resources and money mean that higher fertility rates could be prohibitively high.

Using a federal budget yardstick and a standard of living yardstick, we can get different answers to the “just right” fertility rate. In countries that will have a demographic imbalance from an aging population, a higher fertility rate will create healthier national budgets through a bigger tax paying labor force. On the other hand, the cost of children creates a tradeoff that might be too expensive.

And that is why Harry Truman asked if anyone could locate a one-handed economist.