Last Monday, I was fourth in a line-up of cars outside a NYC parking lot.

Unable to decide if I should stay or look elsewhere, I knew that an economist had the answer.

At the parking lot, I thought to myself that because I had been in line for 15 minutes, I should not leave and try to find another place to park. Similarly, after having read a boring book for several hours, it’s tough fior me to stop.

My parking and reading dilemmas are similar to the decisions that governments and business contemplate.

The cost of California’s bullet train, connecting five of the state’s 10 largest cities, continues to exceed projections. Initially estimated at $33 billion, now the project, will more likely run a whopping $113 billion. As of now, they are working on a 171 mile starter leg.

The route of the train is the black line. A second phase is in gray: 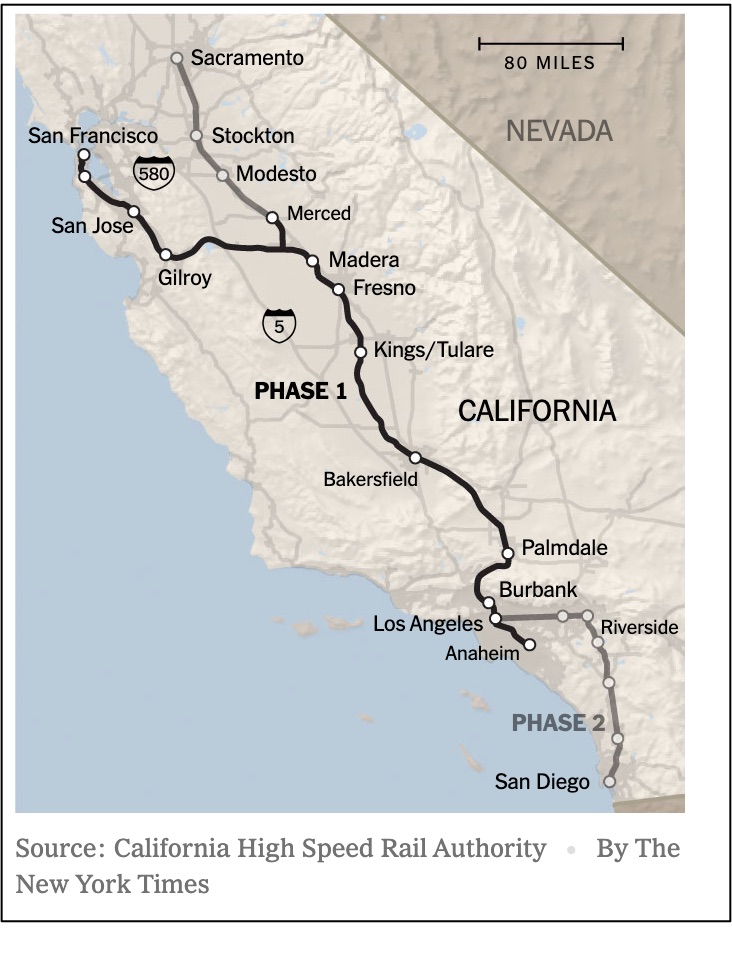 With the debate about the train project continuing, some feel the past investment is propelling them to continue.

As potentially comparable examples, USA Today had a list of products for which people had to decide whether or not to persevere. The list includes Ford’s Edsel and Google Glass. Also, I could not believe that Frito Lay tried to sell us Cheetos lip balm. And while we associate Apple only with winners, remember the Newton?  And of course there was New Coke–the campaign from Coca-Cola to replace the original Cola recipe we all knew and loved by a sweeter drink that could better compete against Pepsi.

Whether looking at a parking lot, a fast train, or lip balm, the attraction of a past investment is a key consideration. Called a sunk cost, a past investment of time and money is unrecoverable. Although sunk costs are gone, they still tend to influence a future decision.

Economists say the value of sunk costs is a fallacy. Instead, we should focus on future cost and benefit.

My soiurces and more: The USA Today product flop article was a good read. Next, for more on the California high speed train, the facts are here and here.