Instead of Sharm el-Sheikh, perhaps COP27 should have been held in Bethel, Alaska. In Bethel and the earth, our junk is piling up.

A city of 6,373 people (projected for 2022), Bethel is a Southwest Alaska metropolis. For medical care, for shopping, Bethel is where you go. Nearby, 56 Alaska Native tribes live in small groups of several hundred or so.

Visiting Bethel is not quite so easy. Because it is located on a subarctic tundra wetland with a network of ponds and streams, it never connected to the state’s road system. Instead, the only way to access the city is by plane or boat and sometimes a truck when the river is frozen.

You can see that Bethel is in the middle of a lot of water: 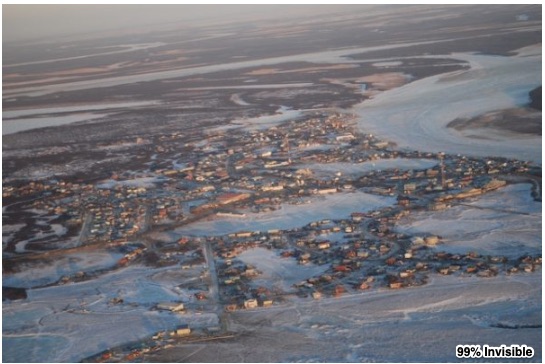 The necessities do come in. Cargo planes and barges bring their food, medicine, and cars. However, moving anything in the other direction is the problem. Except for people, little leaves Bethel.

It’s too expensive and too inconvenient to ship garbage out of Bethel. So it stays there.

A typical backyard has piles of junk. There are oil drums, wooden pallets, all sorts of items under large tarps. At the landfill, you can find the spare parts you need from the refrigerators, the stoves, and anything else that was abandoned.

To all of this we can add weather conditions that are especially unkind to local roads. The ice that freezes, melts, and then refreezes creates an unimaginable number of potholes and cracks and heaves. The result?  Hundreds of dead cars. Vehicles have been left on roads, in public parking lots, and especially at the airport.

So yes, in Bethel the incentives can be unusual. You place your junk in your backyard. You abandon your dead car. And the taxi cab business is thriving. At 59, Bethel has (reputedly) one cab for every 110 people because people prefer not to drive their own cars in bad weather and the city’s visitors need a cab when they arrive by plane or boat.

Some say that our incentives on the earth could be more similar to Bethel than we realize. We just do not see our junk piling up.

My sources and more: Thanks to 99% Invisible for the story of Bethel’s junk. In addition, Bethel’s up-to-date demography is at the World Population Review. Do take a look. It is rather interesting. Please note we have repeated most of a post from 2019. It was one of our more popular environmental stories. But do note also that nowhere could I confirm that Bethel remains the same as 2019 when we first wrote about it.