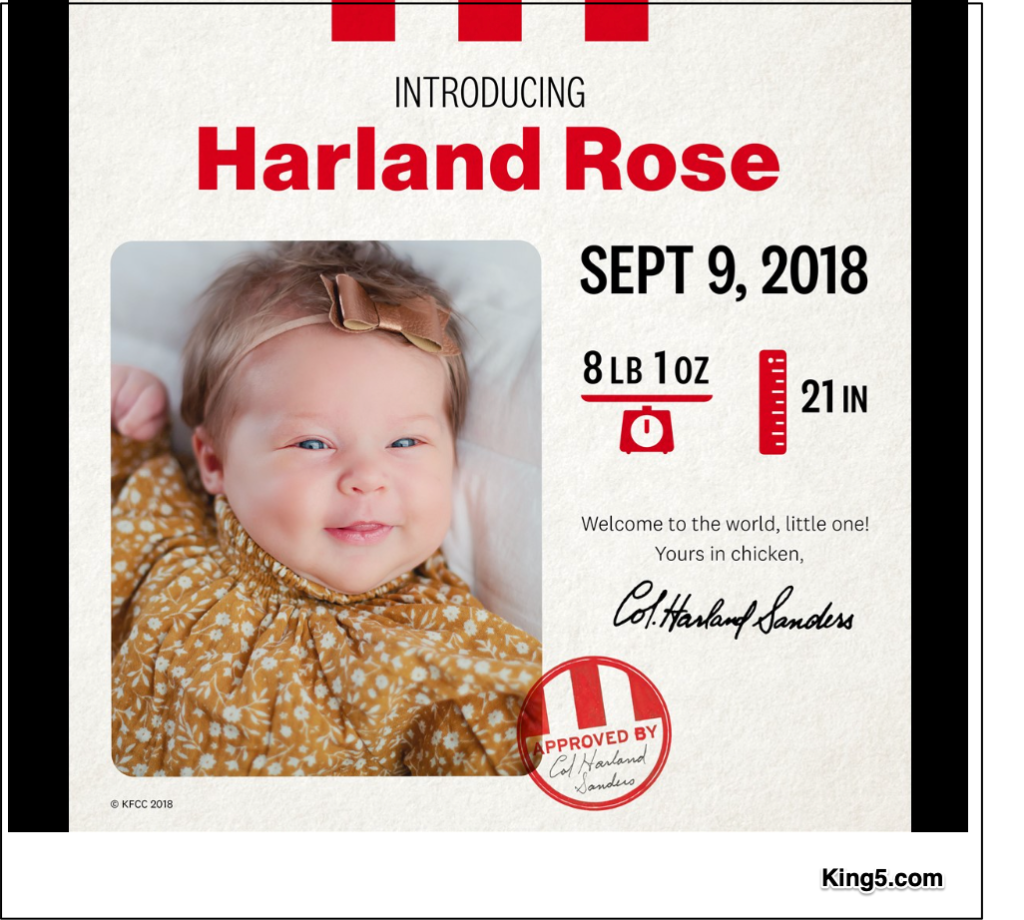 This was the first Harland:

The company explained that it selected $11,000 because of its 11 herbs and spices. It expects the winner to use the money for college tuition.

So yes, KFC is looking for publicity. But the parents who named their little one Harland could also be sending a message.

These were last year’s top ten for boys and girls: 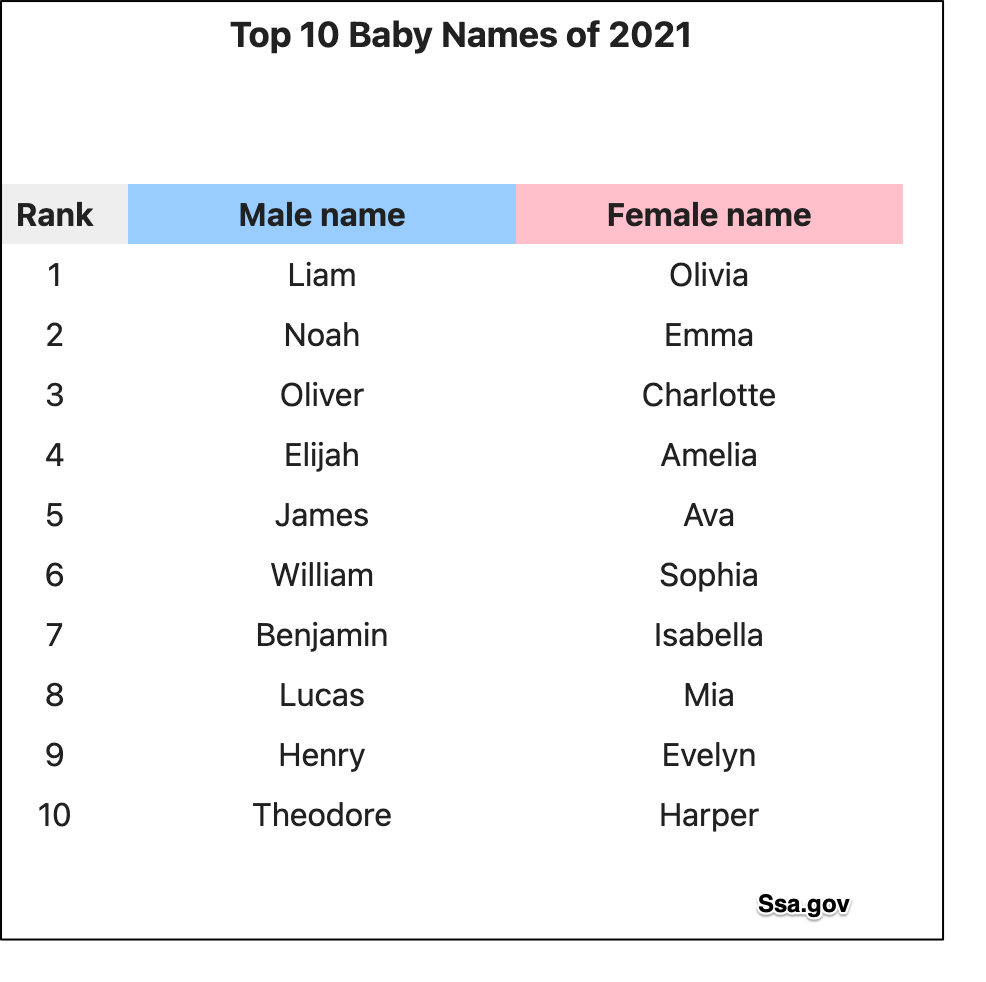 Then also, parents changed their mind: 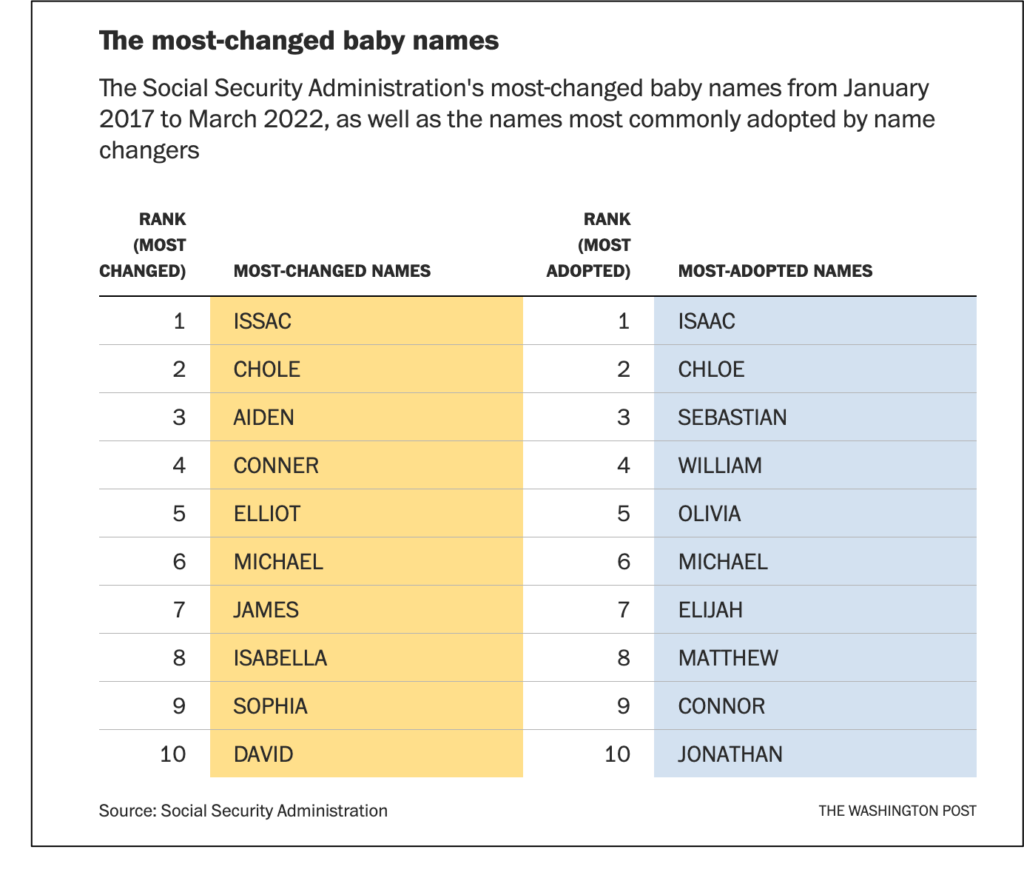 Looking at each of those names, we can ask what the parents are telling us. These are some possibilities…

Conservative parents use more masculine sounding traditional names with harder consonants and/or fewer syllables. We might have the perfect example from Republican Sarah Palin (2008 VP candidate). She named two of her daughters Bristol and Piper and her two sons, Trig and Track.

Meanwhile, parents who are more liberal tend to select uncommon names that have obscure significance. For example, they might name their children Franny and Zooey because of J.D. Salinger. They also will select names with a more “feminine feel” and softer sounding letters.

According to researchers at the University of Chicago, our next step could be to hypothesize consumption patterns.  Distinguishing themselves through tradition and wealth, conservative households vote Republican, own small businesses, occupy managerial positions. Liberals meanwhile like to communicate their cultural prestige by driving a Prius, having solar panels and wearing a Peruvian woven scarf that expresses a social concern for the world.

Several years ago, a group at Verdant Labs said they went through a list of more than two million people. Scouring public records, they connected names to professions and came up with some links. For example, if your name is Richie, it is more likely that you will become a guitarist. Meanwhile, Mikes and Jims tend to be football coaches.

When they connected the names and jobs, the people at Verdant Labs warned us not to assume that a list of football coaches will necessarily have more Mikes and Jims. Instead they discovered that among people named Mike, there was an unusually high percent of coaches.

Here is an excerpt from a Verdant Labs graphic with the names/jobs connections: 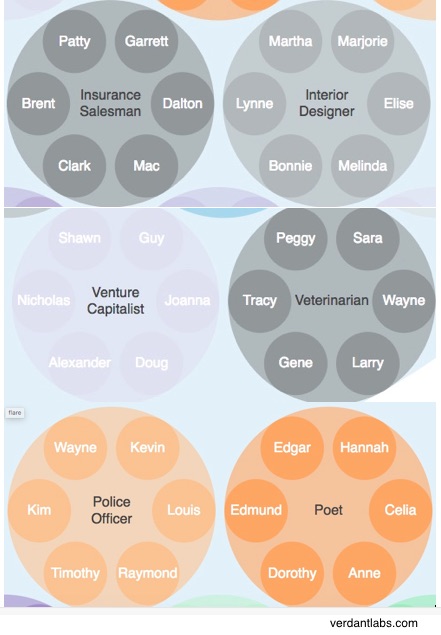 While I am not sure about the academic rigor for some of the baby naming research, I do believe that many parents say something through their children’s names. They send a signal.

Explained by behavioral economists, signaling can involve a very specific act that conveys a much broader message. A politician votes for the death penalty to show he is tough on crime. Someone shops at Annye’s Organics to demonstrate concern about the environment. And, you name your little boy Odysseus to display your knowledge of Greek mythology as you nudge him in a literary direction.

But what then is the winner of the Harland contest signaling?

My sources and more: For my update, ssa.gov had the baby names as did The Washington Post. Then, in our previous 2018 post, I cited this Atlantic article and this Washington Post article on the significance of names.

Please note that most of today’s post was in a past econlife and our Colonel Sanders photo is from Wikipedia.