International trade is about more than sending what you made at home to another country. Like Germany’s pillows and China’s Oreos, sometimes, they might not like it.

One new resident of Berlin called her 31″ by 31″ pillow  “a giant marshmallow.” Too large, it was also too soft.

When you lay your head on a traditional German pillow, all support disappears. Although you have a vast expanse of pillow on which to lie, there is little support because the down filling migrates to the corners.

One blogger posted this image to show that the German pillow is far larger than the human head:

Everybody in the U.S. knows that eating an Oreo is an experience. You split open the cookie, slowly swallow the filling, and then submerge its chocolate remains in your milk. At Mondelēz they call it, “Twist, Lick, Dunk.”

When the Oreo team brought their cookie to China in 1996, they expected that familiar enthusiastic response. Like always, they just replicated their U.S. ads, in-store displays, pricing, and packaging. Especially because biscuit sales were up in China, they thought they had another winner. Instead, sales were tepid. Consumers said the taste was too sweet and no one knew to “twist, lick, and dunk.”

Taking a second look at the Chinese cookie eater, Kraft (its snack food unit became Mondelez in 2012) decided to redefine the Oreo experience. They made the cookie less sweet, created a cylindrical/straw-like Oreo that dipped but did not divide, and developed nonwhite fillings. With the new product, they marketed a cheaper package that more people could afford and an ad campaign that introduced the dunk in the milk concept. The result? Oreo became #1 in China.

In China, the Oreo did not have to be round: 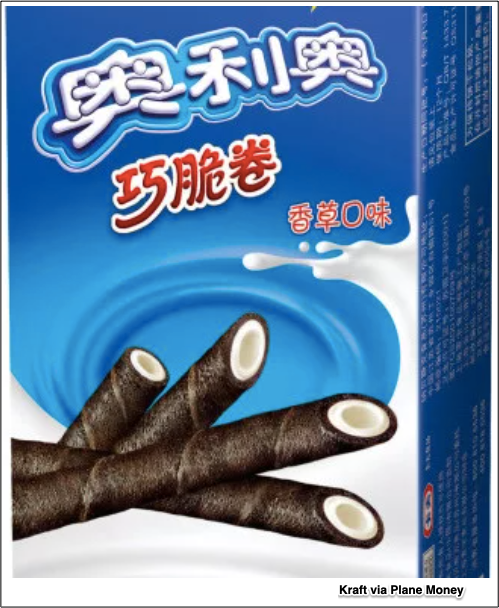 Being a trading nation is about more than shipping products abroad. At first it was the 18th century New England merchants who orchestrated trade from home. During the 19th century, businesses like I. M. Singer & Co. (sewing machines) secured foreign patents, sold exclusive selling rights to representatives abroad and established foreign manufacturing facilities. Then, the next step was the foreign subsidiary through which the multinational firm increasingly took on the identity of its home away from home.

And that returns us to the German pillow and the Chinese Oreo.

My sources and more: Reading about German pillows reminded me it was time to return to Chinese Oreos. Since hey were first introduced in 1996, their popularity has gone up and down and up again. Please note that several of today’s paragraphs were in a previous econlife post.