Where More Diapers Are a Disaster

Targeting the elderly, Unicharm has tipped its diaper marketing in China away from babies. Whereas the incontinence market was close to $800 million in 2020, the projection is $16 billion for 2030 and a whopping $30 billion by 2040.

There are two sides to China’s diaper surge: the beginning of life and the end.

Hoping to boost the birth rate, China wants more people to get married.

It has not quite worked out.

For eight years, the number of marriages in China has sunk, And now, with new marriage licenses down to a 13-year low, the trend continues. During the first three quarters of 2021, the total was just 5.9 million.

One reason is the expense.

Combined, the bride’s dowry, housing, and cash have become unaffordable engagement gifts. Ballooning to as much as Rmb300,000 ($47,000), the amount rose by 100 percent during the past seven years. When it touched six times the average yearly household income, these engagement gifts became prohibitive for rural couples.

As we might expect, China’s Ministry of Civil Affairs responded. For starters, they are proposing a “suggested price,” for the three main engagement gifts. One young man had to give his new in-laws Rmb99,999 in cash and Rmb50,000 in gold jewelry. The MCA goal is Rmb30,000.

However, because of one-child, the women have the leverage. Not enough for all of the single men, they can ask for more. The singles numbers in the marriageable age cohort have been estimated at 2.2 million men and and 1.2 million women.

Making it all worse, increasingly, women don’t want to marry. In a 2010 survey, 85 percent of the female respondents said marriage was a necessity. Now, especially because the women are wage earners, marriage is less attractive. In one recent young adult survey, 60 percent of the participating females said marriage was necessary. You can see why the number of marriages plunged by 12 percent last year.

It all adds up to another another downward nudge of China’s birth rate. 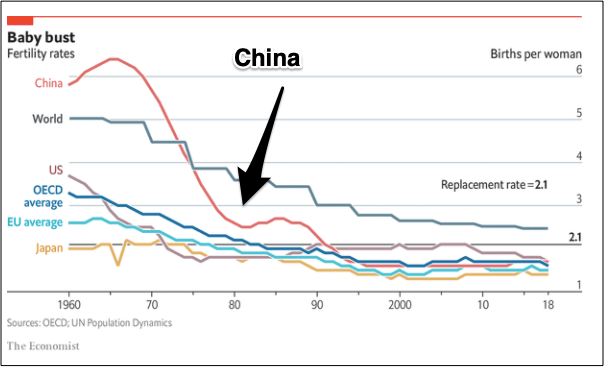 In North Asia investors believe the death business has new life, perhaps because of the growing number of elderly people.

Crematorium operator Kosaido was a hot stock before it crashed. Knowing that a Japanese seller of burial plots and funeral services attracted investor interest, analysts predict the same phenomenon in China. They cite the 10 million people that died there last year and the country’s commitment to filial  piety.

In China, 17.9 percent of the population was over 60 in 2018. Thirty years from now, it could be one-third. They need more babies now to support them then. 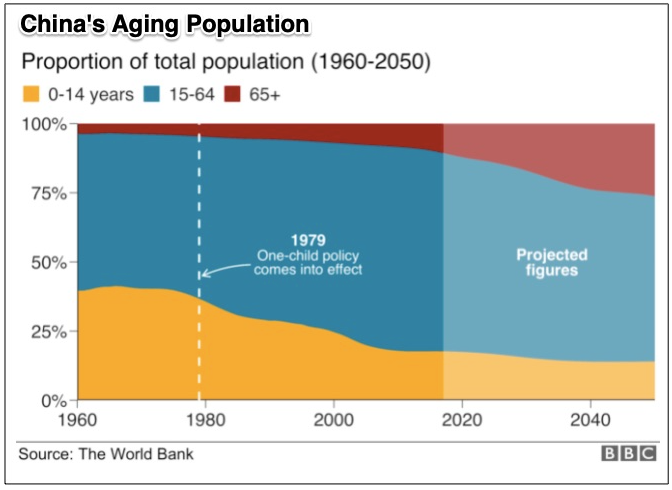 The graphic returns us to the need for a new diaper market.

My sources and more: The Financial Times had the Chinese nappy, wedding, and funeral stories. Meanwhile, the Economist, here and here, had China’s new demographics. And finally, for more on China’s one child, two child, three child policies, econlife took a look here.

The Life of a Christmas Tree: From Seedling to Six-Footer

What We Need To Know About E-ZPass