What We Need To Know About E-ZPass

A firm called iDriveThru figured out how to let Wendy’s use your E-ZPass for a burger and whatever else you bought. The E-ZPass tag was just used for identification. Then, to get paid, they charged the credit or debit card information that Wendy’s had on file.

Here in New Jersey, we associate toll-by-plate with E-ZPass. In Massachusetts, they also have AET (All Electronic Tolling). However, whatever the format, electronic toll payment made a huge difference.

Used to be, we paid roadway tolls with a ticket and some cash. We would slow down, stop at the tollbooth, and hand over the money. It took (frustratingly) longer if someone ahead needed change, asked directions, or had a bit of a chat.

Then, in 1997, New Jersey got its first E-ZPass at the Bayonne Bridge. Beyond the increase in convenience, the revenue boost was a benefit. As vehicles became more efficient, municipalities needed to offset lost gas tax dollars.

As a result, states could optimize the potential of fixed or variable tolls. To reduce congestion and increase collections, tolls can rise or fall. It would just depend on the time, the number of passengers, or who the driver was (like an out-of-stater). In addition, toll-by-plate diminishes pollution by eliminating the stop at the booth where you no longer need an army of toll collectors and the paraphernalia that requires. A study in Taiwan confirmed that they reduce pollution and cancer, and one from Florida cited fewer crashes.

Below, you can see the states that have implemented toll-by-plate: 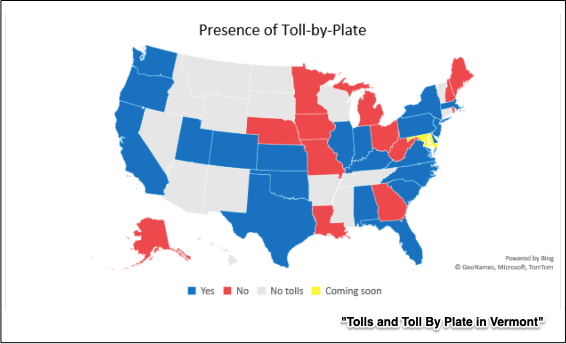 One problem is the need for high volume. Because electronic systems can be pricey to install and maintain, you need “economies of scale” to make them worthwhile.

Toll-by-plate takes us back to the radio frequency identification used by Soviet spies and then to the U.S. inventor who proposed the E-ZPass to the New York area Port Authority. Actually, at first, they said no.

It took 30 years for someone to realize the idea had potential. Comparing the numbers, one executive imagined electronics accommodating 1,000 vehicles an hour while the tollbooth could have just 250 to 300 vehicles and the coin lane, 600 to 700. Fast forwarding, in 2019, E-ZPass transponders handled 3.8 billion tolls.

The key though to toll-by-plate is the minimum transaction cost. Defined as the hassle connected to accomplishing a task, for consumers, the electronic toll is effortless. As they predicted, volume can surge during peak hours and so too can revenue because, as one economist pointed out, tolls can be increased with no one noticing.

Yesterday, driving to and from New York City, I had no idea what E-ZPass charged me. Maybe the same was true for the E-ZPass at the Wendy’s Drive-Thru.

My sources and more: Reading yesterday’s WSJ, I came across their “Driver Dollars” look at E-ZPass. It gave me the nudge to take a close look at the impact of E-Z Pass. For the history, NPR, the NY Times, and WNYC had some facts. Next, Pew and the University of Vermont provided some analysis. And finally, Grub Street, the NY Post, and this paper completed the picture.

Where More Diapers Are a Disaster

December 2021 Friday's e-links: The Search For Some Missing Bitcoin