We know that China retreated from its one-child policy to a two-child limit in 2016. But because the birth rate failed to soar, they proclaimed during August that couples could have three children.

China is not the only country that wants to boost its birth rate. The global fertility rate has been descending: 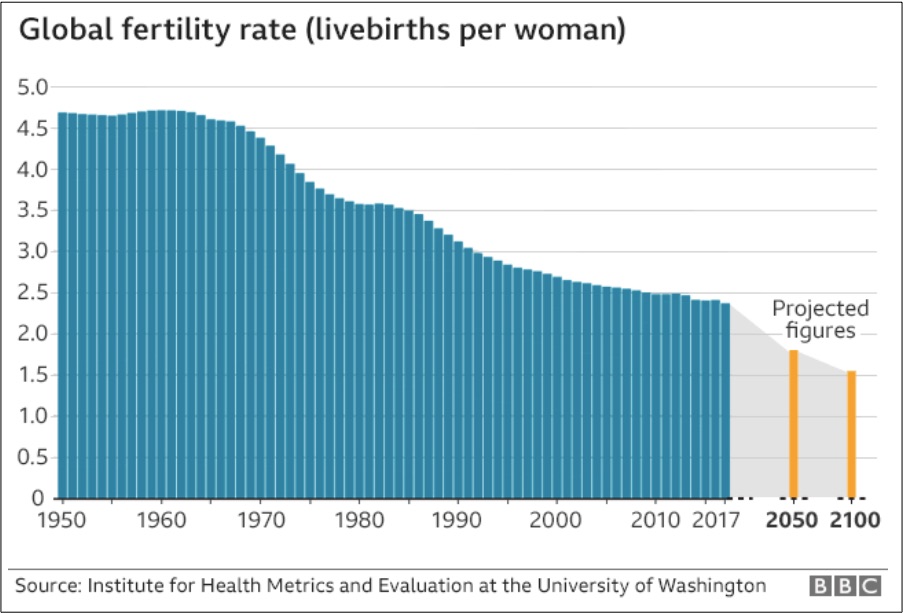 China altered its incentives to expand family size. They eliminated a financial penalty–the social maintenance fee–that couples paid for having too many children. According to the BBC, they also are urging local government to implement child friendly policies that include parental leave and childcare for working parents.

However these graphics display the immensity of the challenge. Trying to switch, they discovered that one-child was more ingrained than they imagined.

Marriage is down and divorce is up:

One-child skewed the size of the male population. (One Chinese businessman even paid $1 million to an introductions agency.) The male/female ratio increased to 114 men for every 100 women:

You can see a cascading birth rate. The total number of births dropped from 18 million in 2016 to 12 million last year:

With the birth rate declining, officials worry that “China will grow old before it grows rich.” Their concern is the growing number of old people that a relatively smaller working population has to support. Technically, we are talking about a dependency ratio with the aged as our numerator and the labor force as the denominator: 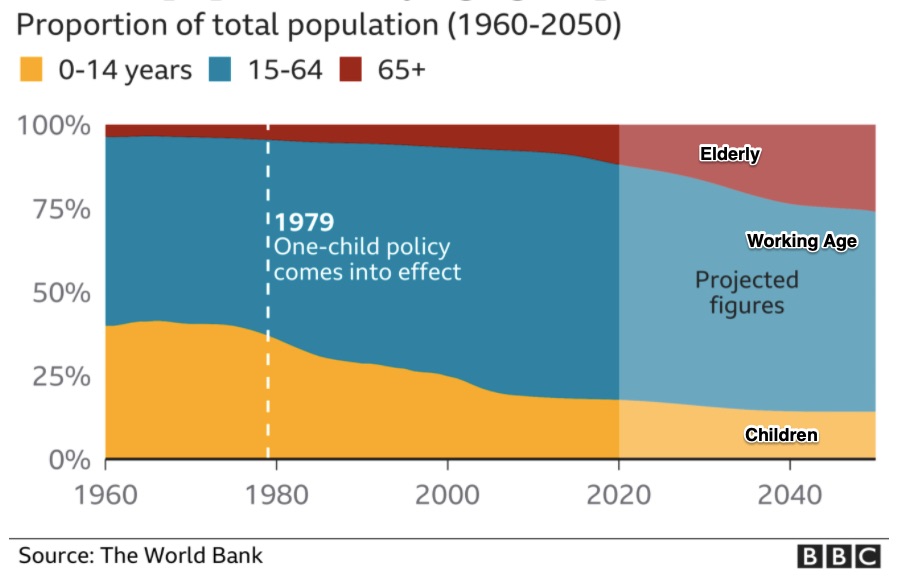 Although other countries have not had a one-child policy, still the incentive to have fewer children prevailed elsewhere. In a list of  fertility rates for 198 countries, South Korea has the world’s lowest. Below the replacement rate, a South Korean woman can expect to have 1.1 children during her lifetime. Somewhat similarly, 23 countries, including South Korea, Japan, Spain, and Portugal, can expect close to a 50 percent population decline by 2100.

Elsewhere, the projected decline is less:

The answer to why birth rates are down is a happy reason. Women have become more educated,  they are in the work force, and they have access to contraception.

Also asking why, this video has some answers:

My sources and more: The BBC, here, here, and here had the update on China’s birth rate. Then, the UPI had the facts for South Korea and Japan. On global fertility, the best article, though, was from the BBC.

Why Fat Bear Week 2021 Is About More Than Hibernation