China’s one-child policy solved one problem when it slowed the population growth rate:

But it created many others.

China’s one-child policy became the law for most of the population at the end of the 1970s. Implemented locally, one-child was fueled by the law, community institutions, sterilization, abortion, and infanticide. It took 36 years for them to decide that the tradeoffs were too costly.

In 2015, the Chinese government announced a two-child policy. Also unpredictable, the new directive resulted in more families with two kids but the overall number of births declined. From 17.9 million babies  in 2016 to 17.2 million in 2017, the number of births further plunged to 15.2 million last year: 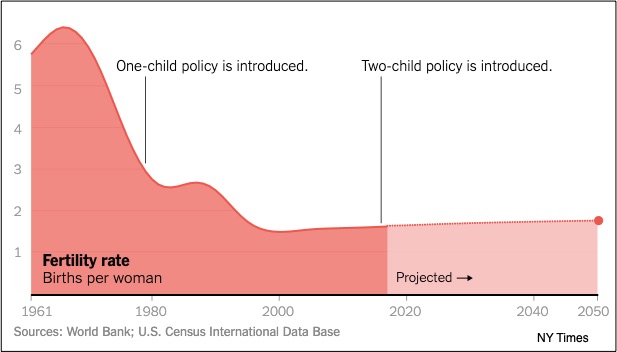 Demographers predict that China’s population will shrink because they are at an officially declared 1.6 babies per woman (that could actually be much lower). “Replacement level fertility” is estimated at 2.1 children per woman.

Whereas they once worried about too many children, now the concern is too many old people. Please imagine the parents that married “single children” have to care for. Two children, four parents. And those parents are living longer.

Below, the proportion of the elderly population is increasing as the relative number of working age adults shrinks: 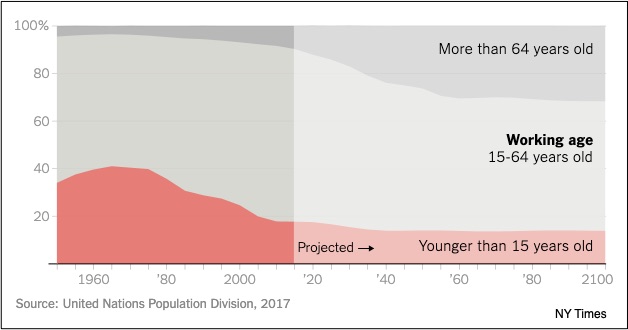 Or we can think of a 2015 story of Rudong County’s aging population. Located along China’s east coast, Rudong County had increased the number of its government-funded retirement homes from one to five. Meanwhile only one elementary school remained from the 14 that used to exist in each village.

The old age dependency ratio of China is rising. Very simply, an old age dependency ratio compares the proportion of the population that no longer works to those that do. The OECD calculates its ratios (below) by telling us the number of people aged 65 and older per 100 of working age people (aged 20 to 64). As the ratio climbs, so too does the burden on those who have a job.

The following old age dependency ratios are for the past, now, and the future:

And yes, those sky high projections are enough to make Chinese grandmas worry.

My sources and more: Economist Ed Yardeni’s daily market letter reminded me it was time to return to China’s aging population. For the facts, this IZA paper. the NY Times, the Washington Post, and this article were ideal. Meanwhile, NPR had the Rudong story in 2015.

This post was slightly edited after publication to improve clarity.

The Problem With Finding the Right Size