In addition to its natural strawberry flavor, a Kellogg’s Frosted Strawberry Pop-Tart contains pears and apples.

Looking for a $5 million settlement, a New York resident is suing Kellogg’s because her Pop-Tarts need more strawberries. One of at least three lawsuits (in New York and Illinois), she claims the product’s name is misleading. As she contends, we just need to look at the label to see that a Strawberry Pop-Tart “contains two percent or less of ‘dried strawberries, dried pears, dried apple,’ and, ‘red 40’…” For the same reasons, in a second suit,, Kellogg’s might be violating Illinois’s Consumer Fraud and Deceptive Business Practices Act.

The Pop-Tart case echoes the tuna suit against Subway and another one against Wise Potato Chips. Each one claims the producer is misleading consumers.

A behavioral economist could say that product names create reference points. Explained as a term, an idea, or even a number that defines where we start, a reference point influences where we end. In one experiment, before beginning, Nobel Laureate Daniel Kahneman expressed a seemingly random unrelated number before asking a study’s participants to guess someone’s age. When the number was high, the guess was higher. Given a low number, the person’s guess was less. Similarly, if a gallon of gas is selling for $3.00 and increases to $3.50, we think gas is expensive. However, if the price drops from $4.00 to $3.50, we see $3.50 as a much more appealing price.

Below, the strawberry is the focus. It’s the reference point: 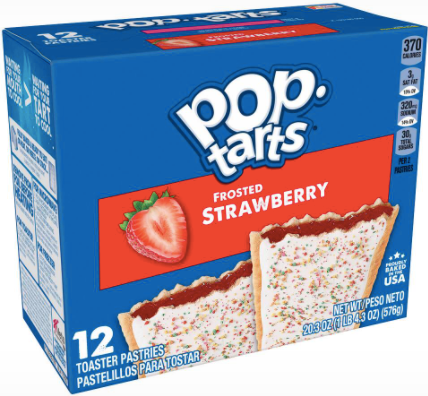 With Strawberry Pop-Tarts, Kelloggs wants us to think fruit. The strawberry is our reference point for taste and health, even when we know we are eating a sugary breakfast.

My sources and more: Thanks to WSJ for alerting me to the Pop-Tart tort. For the facts about the case, The Washington Post and Newsweek had more of the details. Then, flipping to the behavioral side, the perfect book for reference points and much more is Thinking Fast and Slow.

The Ups and Downs of Gas Prices

The Message That a Mail Truck Delivers